The Undertaker Announces Retirement From WWE, Says ‘There’s Nothing Left for Me to Conquer or Accomplish’ 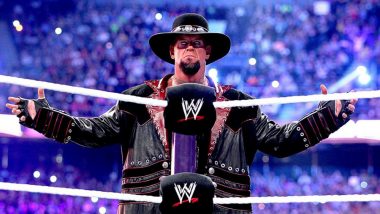 Mark William Calaway or commonly known as ‘The Undertaker’ has announced his retirement from WWE. The news was broken to the fans during the last episode of the legendary wrestler’s docuseries ‘Undertaker: The Final Ride.’ In the final chapter of the series, ‘The Deadman’ revealed that he is at peace with not getting in the ring again. After nearly 33 years in the wrestling world, the great man has finally said goodbye. The Undertaker Regrets His Decision of Choosing Brock Lesnar Over Roman Reigns After Former Broke His WrestleMania Winning Streak.

Undertaker’s last match in WWE was at WrestleMania 36 when he and AJ Styles fought in a Boneyard match which was the perfect ending for an illustrious career. The Deadman emerged victorious in the match which saw both superstars give their all. ‘I’m at a point that this time the cowboy really rides away.’ Said the 55-year-old. AJ Styles Wishes to Face The Undertaker Again at WrestleMania, The Phenomenal One Reveals at ‘After The Bell’ Podcast.

‘I believe I’m at a place now, post-Boneyard, which was a hellacious battle against one of the best in the business. Here you are, climbing on your motorcycle and taking off. There was a lot of thought and a lot of emotion, one of those being ‘are you happy enough with that?’ It was a powerful moment. You don’t necessarily always get those.’ The Undertaker added.

You can never appreciate how long the road was until you’ve driven to the end. #TheLastRide @WWENetwork pic.twitter.com/JW3roilt9a

‘There's nothing left for me to conquer or accomplish. The game has changed. It's time for new guys to come up. The time just seems right. This documentary has helped me discover that and opened my eyes to the bigger picture and not judge myself as harshly these last few years.’ He said further.

The Cowboy Rides Away

In the final episode of #TheLastRide, the @undertaker sheds some light on what's next for 'The Deadman'. pic.twitter.com/hbg5OJchFA

The Undertaker has teased retirement on few occasion with the last time being at WrestleMania 33 when he lost to Roman Reigns. But the 55-year-old decided against it due to the lacklustre nature of the match. The Boneyard match, however, was the perfect ending for him as he rode off on his motorbike to Metallica after giving his all for all these years.

Going To Leave My Way

"I did things my way, and I'm gonna leave my way."#TheLastRide @undertaker pic.twitter.com/Qy0Qfxk3zL

The Undertaker joined WWE (then WWF) in 1990 and made his official on-camera debut at that year's Survivor Series. He made his WrestleMania debut at the seventh edition of the Pay-per-view, an event at which he went unbeaten for 21 editions.

(The above story first appeared on LatestLY on Jun 22, 2020 10:02 AM IST. For more news and updates on politics, world, sports, entertainment and lifestyle, log on to our website latestly.com).