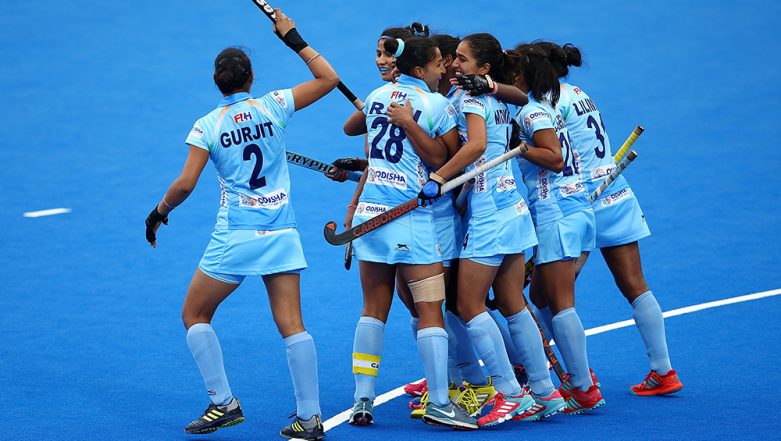 New Delhi, July 26: Hockey India on Friday named the 18-member Indian Women's Hockey team for the forthcoming Tokyo Olympics 2020 Test Event scheduled to take place in Tokyo, Japan from 17th-21st August 2019. The Indian team will be captained by Rani and vice-captained by Savita. Under Chief Coach Sjoerd Marijne, the composition of the team has remained similar to the one which participated in the FIH Women's Series Finals Hiroshima 2019, with the Dutchman having opted for only two changes in the 18-member team selected for the Tokyo Olympics 2020 Test Event. Robots to Welcome Visitors and Help to Transport Javelins During Tokyo Olympics 2020 in Japan.

Youngsters Sharmila Devi and Reena Khokhar have come into the team, with Sunita Lakra and Jyoti giving way. Khokhar had been sidelined due to injury but makes a comeback into the side after recovering, while Sharmila Devi will be expecting to make her debut for the national side. The Indian team, currently ranked No. 10 in the FIH Rankings, will be facing tough challenges as they will be up against the likes of World No. 2 Australia, World No. 11 China and hosts Japan who are currently ranked 14th in the FIH Rankings. This Fan-Made Tokyo 2020 Summer Olympics Logo Design Officially Wins The Internet Today! Check Out Photos.

The team consists of experienced Goalkeepers Savita and Rajani Etimarpu, who will look to guard India's goalpost, while Defenders Deep Grace Ekka, Reena Khokhar, Gurjit Kaur, Salima Tete and Nisha have also been included in the 18-member team. Midfielders Sushila Chanu Pukhrambam, Nikki Pradhan, Monika, Lilima Minz and Neha Goyal will look to command the midfield. Rani, Navneet Kaur, Vandana Katariya, Lalremsiami, Navjot Kaur and Sharmila Devi are the Forwards who have been picked in the team.

"We are looking forward to playing three top countries at the Tokyo Olympics 2020 Test Event as I rate them all highly. We have selected a squad of 18 players where only 16 players will be allowed to play in accordance to the Olympic standards. I will be very interested to see how we fare against these countries, and what we need to improve for the FIH Olympic Qualifiers because everything that we do, will be focused on that. We will be learning good lessons in this tour regardless of whatever happens," said Chief Coach Sjoerd Marijne.