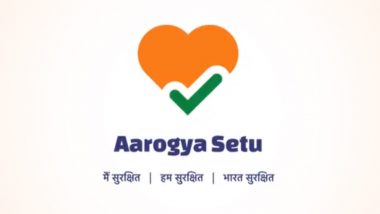 New Delhi, June 30: Users of the Aarogya Setu app late on Tuesday faced some issues while trying to log in on the application for a brief period. In a tweet, the Aarogya Setu app also acknowledged the problem and said their teams were working to rectify it. The issue was resolved after some time. During the period, the app wasn't working properly and showing a message that read: "unable to evaluate your risk status". Aarogya Setu, Itihaas Apps Approved by MHA for Combined Use For Future Detection of COVID-19 Outbreak.

"Some users have reported login errors on #AarogyaSetu. Our technical teams are on the job. We will be back soon. Sorry for the inconvenience (sic)," read a tweet by the Aarogya Setu app. Users took to Twitter to complain that they were unable to log in on the coronavirus-tracking app. They said they were logged out of the application. Nearly 40 minutes after, the application tweeted: "Setu is back!! (sic)" Aarogya Setu App Used for Surveillance by Government of India? PIB Fact Check Debunks Fake News.

Some users have reported login errors on Aarogya Setu. Our technical teams are on the job. We will be back soon. Sorry for the inconvenience.

The Aarogya Setu app was launched by the Centre in April this year. Developed by the Ministry of Electronics and Information Technology (MeitY), the application tracks coronavirus cases and lets users know if they are near to an infected person.

(The above story first appeared on LatestLY on Jul 01, 2020 12:20 AM IST. For more news and updates on politics, world, sports, entertainment and lifestyle, log on to our website latestly.com).