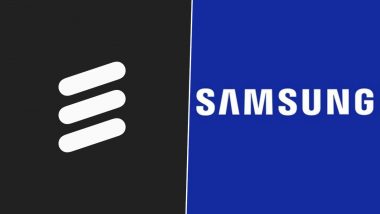 "We are delighted to sign a mutually beneficial agreement with Samsung. This important deal confirms the value of our patent portfolio and further illustrates Ericsson's commitment to FRAND (fair, reasonable, and non-discriminatory) principles," Ericsson chief intellectual property officer Christina Petersson was quoted as saying in the report on Sunday.

Samsung's FRAND commitment is a contract between Samsung and European Telecommunications Standards Institute. The application of the FRAND commitment is in relation to various global cross-licences that cover both parties' patents for 2G, 3G, 4G, and 5G cellular standards.

Ericsson had accused Samsung of not adhering to its contractual commitments for various licensing patent agreements. In a suit filed at District Court in the US last year, Ericsson had claimed that Samsung violated contractual commitments by failing to adhere to FRAND terms and conditions. Both the companies have now pulled their complaints filed with the US International Trade Commission, according to the report. In its second quarter, Ericsson expected that its licensing revenue would be approximately $240 million to $300 million.

(The above story first appeared on LatestLY on May 10, 2021 02:06 PM IST. For more news and updates on politics, world, sports, entertainment and lifestyle, log on to our website latestly.com).