Sundar Pichai, CEO of Google and Alphabet, has doubled down on making new breakthroughs in some of the most technically challenging areas of computer science to countries like India that need them the most. 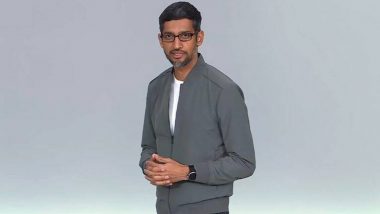 New Delhi, May 12: Sundar Pichai, CEO of Google and Alphabet, has doubled down on making new breakthroughs in some of the most technically challenging areas of computer science to countries like India that need them the most. Addressing the company's flagship Google I/O 2020 conference, Pichai said that Google's flood forecasting technology sent flood alerts to 23 million people in India and Bangladesh last year.

"During last year's monsoon season, our flood alerts notified more than 23 million people in India and Bangladesh. And we estimate this supported the timely evacuation of hundreds of thousands of people," he said late on Wednesday. Google Join 30 Other Companies to Protect H-4 EAD Program to Creates Jobs and Helps Families, Says CEO Sundar Pichai.

He also announced that the company is adding 24 new languages to Google Translate. "Together, these languages are spoken by more than 300 million people," he added. On Google Maps, the company has mapped around 1.6 billion buildings and over 60 million km of roads to date.

"We've also doubled the number of buildings mapped in India and Indonesia this year. Globally, over 20 per cent of the buildings on Google Maps have been detected using these new techniques," said Pichai.

"Viewers can now auto-translate video captions in 16 languages, and creators can grow their global audience," he noted. The company also introduced automated summarisation for Google Docs.

"Using one of our machine learning models for text summarization, Google Docs will automatically parse the words and pull out the main points. This marks a big leap forward for natural language processing," said Pichai. "We're launching summarisation for other products in Workspace. It will come to Google Chat in the next few months," he added.

(The above story first appeared on LatestLY on May 12, 2022 01:03 PM IST. For more news and updates on politics, world, sports, entertainment and lifestyle, log on to our website latestly.com).