Google Maps is now getting a full-fledged dark mode on Android, the feature has been in testing since September 2020. The company also introduced some updates to Android Auto. 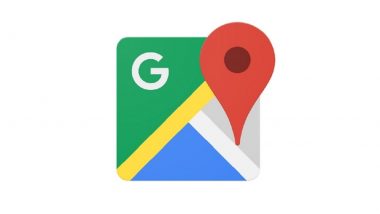 San Francisco, Feb 24: Google Maps is now getting a full-fledged dark mode on Android, the feature has been in testing since September 2020. The company also introduced some updates to Android Auto. In addition to custom wallpapers, Android Auto is now going to feature games as well. ISRO, MapmyIndia Team Up To Take on Google Maps in India.

"These days, we are all experiencing a bit of screen fatigue. With the dark themes in Google Maps soon expanding to all Android users globally, you can give your eyes a much-needed break and save on battery life," the company said in a statement on Tuesday.

Once your Google Maps has been updated, you can turn it on for your entire phone by heading to Settings > Theme and pick Always In Dark Theme. For longer drives, you and your passengers can stay entertained with voice-activated games like trivia and "Jeopardy!". Just say, "Hey Google, play a game" to get started.

Android Auto is also getting a split-screen feature that will put Maps side by side with media controls, Google is also rolling out Password Checkup to Android to help alert you about potential leaks or data breaches that may have exposed your existing passwords to hackers. Password Checkup will be rolling out to devices with Android 9 and above, and will automatically check passwords already saved in Android along with any new ones.

(The above story first appeared on LatestLY on Feb 24, 2021 04:09 PM IST. For more news and updates on politics, world, sports, entertainment and lifestyle, log on to our website latestly.com).