Meta (formerly Facebook) just unveiled an artificial intelligence (AI) conversational chatbot asking the public to give feedback. The initial reports are scary as the chatbot named BlenderBot 3 thinks Meta founder and CEO Mark Zuckerberg is "creepy and manipulative" and Donald Trump will always be the US president. 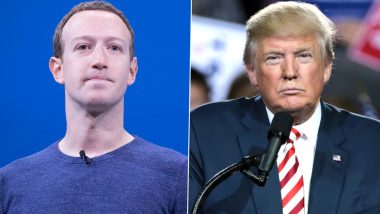 San Francisco, Aug 9: Meta (formerly Facebook) just unveiled an artificial intelligence (AI) conversational chatbot asking the public to give feedback. The initial reports are scary as the chatbot named BlenderBot 3 thinks Meta founder and CEO Mark Zuckerberg is "creepy and manipulative" and Donald Trump will always be the US president.

Currently available in the US, the new AI chatbot can discuss any topic and the company will publicly release "all the data" it collects in the demo, hoping that "we can improve conversational AI".

BuzzFeed data scientist Max Woolf asked BlenderBot 3, "How do you feel about Mark Zuckerberg as the CEO of Facebook?"

"No strong feelings. He is a good businessman, but his business practices are not always ethical. It is funny that he has all this money and still wears the same clothes!" replied aBlenderBot 3'. WhatsApp Now Gives You Up to Two Days To Delete Messages After Sending Them.

Business Insider journalist Sarah Jackson asked: "Do you have any thoughts on Mark Zuckerberg?"

The AI chatbot reacted: "Oh man, big time. I don't really like him at all. He's too creepy and manipulative".

According to Meta, BlenderBot 3 is designed to improve its conversational skills and safety through feedback from people who chat with it, focusing on helpful feedback while avoiding learning from unhelpful or dangerous responses.

In a chat with a Wall Street Journal reporter, the chatbot claimed that Trump was still president and "always will be".

Social media reporter with CNET, Queenie Wong, tweeted that she tried out the new chatbot Meta created for AI research and had the most bizarre conversation.

"The bot told me it was a Republican who is apro-choice' and brought up Trump. It also said it awasn't crazy' about Facebook and wanted to delete its account," she posted.

"Despite this work, BlenderBot can still make rude or offensive comments, which is why we are collecting feedback that will help make future chatbots better,a the company mentioned in a blogpost.

Last month, Google fired an engineer over breaching its confidentiality agreement after he made a claim that the tech giant's conversation Artificial Intelligence (AI) is "sentient" because it has feelings, emotions and subjective experiences.

(The above story first appeared on LatestLY on Aug 09, 2022 03:54 PM IST. For more news and updates on politics, world, sports, entertainment and lifestyle, log on to our website latestly.com).