Microsoft has announced that Xbox Cloud Gaming is available to all Xbox Game Pass Ultimate members with Windows 10 PCs and Apple phones and tablets, via browser, across 22 countries. 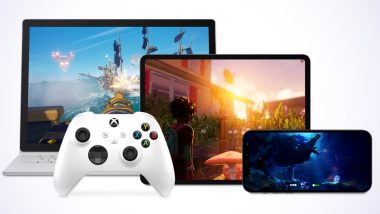 San Francisco: Microsoft has announced that Xbox Cloud Gaming is available to all Xbox Game Pass Ultimate members with Windows 10 PCs and Apple phones and tablets, via browser, across 22 countries. The company said that members can go to xbox.com/play on Microsoft Edge, Chrome, or Safari on PC or mobile device to start playing games from the Xbox Game Pass library. Microsoft Windows 11 Likely To Be Rolled Out on October 20, 2021: Report.

"With billions of active Windows 10 PCs, iOS devices and Android phones, we want you to have new opportunities to play the deepest, most immersive games whenever and wherever you choose," Catherine Gluckstein, Vice President & Head of Product, Xbox Cloud Gaming, said in a statement. "Simply put, we're bringing the Xbox experience directly to the devices you use most," it added.

The Xbox Cloud Gaming update for PC and Apple devices is here! for all the details, you can:​

listen to this remix of our hit single “so many games”​

According to Gluckstein, cloud gaming provides seamless play across your devices. The company said it is also evolving how users can play games.

"When you're streaming games on a PC or mobile device, your game is playing from Xbox hardware in a Microsoft datacenter," Gluckstein said. "This means you can jump into a game, connect with your friends and play through the Xbox network just as you've always done. That's right, your game saves are just the same wherever and whenever you play, so you can pick right back up from where you left off," Gluckstein added. "Today about one-in-six players who play from the cloud are exclusively using custom touch controls that are enabled for more than 50 games -- one I personally love is Minecraft Dungeons," Gluckstein said. "And of course, you can also play games from the cloud using a compatible Xbox Wireless Controller, or one of the many supported controllers and mobile gaming accessories, including the all-new Backbone One for iOS," Gluckstein added.

(The above story first appeared on LatestLY on Jun 29, 2021 11:47 AM IST. For more news and updates on politics, world, sports, entertainment and lifestyle, log on to our website latestly.com).