Mitron App, Touted as 'Made in India' Alternative of TikTok, Back on Google Play Store With Updated Privacy Policy 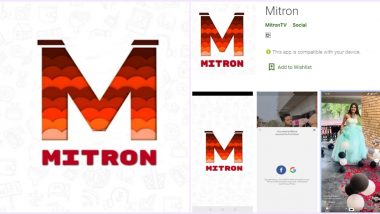 New Delhi, June 6: Mitron app, which was touted as Chinese application TikTok's alternative, is back on Google's Play Store after a few days of suspension. Now, developers of Mitron app have introduced new changes and updated the privacy policy, which had reportedly led to its removal from Google's Play Store. Mitron app became hit, clocking 5 million downloads in less than a month, after Prime Minister Narendra Modi's appeal to promote local products and anti-China sentiments grew in the wake of Chinese forces' intrusion in eastern Ladakh, which is India's territory. Mitron, The Indian Alternative to TikTok? Know Everything About The Short Video Making Social Media App With Over 5 Mn Downloads.

When Mitron app was removed from Play Store, Google had said: "A number of recent app removals received particular attention in India and we wanted to clarify our actions. Earlier this week, we removed a video app for a number of technical policy violations. We have an established process of working with developers to help them fix issues and resubmit their apps. We’ve given this developer some guidance and once they’ve addressed the issue the app can go back up on Play."

Mitron app has been in controversies since its launch. Initially, it was reported that the video-sharing application is "made in India" and developed by an IIT Roorkee student by the name Shivank Agarwal. However, no such person ever came forward to claim ownership of Miron app. Then, a Pakistani software developer company Qboxus had claimed that Mitron is a repackaged version of their app TicTic.

According to a report by News18, Mitron app’s entire source code, including its full set of features and the user interface, was bought from Qboxus for $34 (Rs 2,600). Irfan Sheikh, founder and chief executive of Qboxus had told News18, "We expect our customers to use our code and build something on their own. But Mitron’s developer has taken our exact product, changed the logo and uploaded it on their store."

Later, it had emerged that the Mitron app would put users' privacy at risk. As of May 30, the app did not have a privacy policy. However, a privacy policy under the CCPA (California Consumer Privacy Act ) privacy rights was later added in the app. According to the CCPA, users of Mitron can control their data or get it removed or request the app vendor to not sell user data. However, the privacy policy, as the name suggests, is only applicable to people living in California, United States. In other words, it does not apply to Indian users.

(The above story first appeared on LatestLY on Jun 06, 2020 07:10 PM IST. For more news and updates on politics, world, sports, entertainment and lifestyle, log on to our website latestly.com).