Motorola India will launch two new smartphones - Moto G60 and Moto G40 Fusion, in India tomorrow at 12 pm IST. Apart from cameras, both the handsets are pretty much identical in terms of specifications. 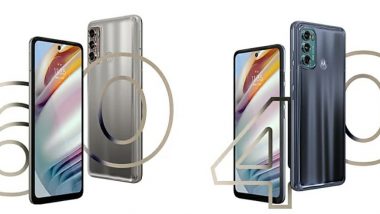 Motorola India will officially announce the prices of its new Moto G series phones tomorrow. The upcoming phones from Motorola are called the Moto G60 and Moto G40 Fusion. Recently, the handsets were listed on the Flipkart website ahead of the launch that revealed various key details and specifications. Both the Moto phones will be retailed online exclusively via Flipkart. It is important to note that prices, sale details and other details will be revealed at the launch that is scheduled to happen tomorrow at noon. New Smartphones Slated To Launch in India Next Week.

Both the handsets are expected to be very similar to each other in terms of features and specifications. The Moto G60 will get a 6.8-inch punch-hole display supporting HDR10 along with a 120Hz of refresh rate. It will be powered by an octa-core Qualcomm Snapdragon 732G chipset. For photography, there will be a 108MP quad-camera setup that will be accompanied by an ultra-wide lens, a macro lens and a depth sensor. The front camera will be a 32MP selfie which will be placed inside the hole-punch cutout. 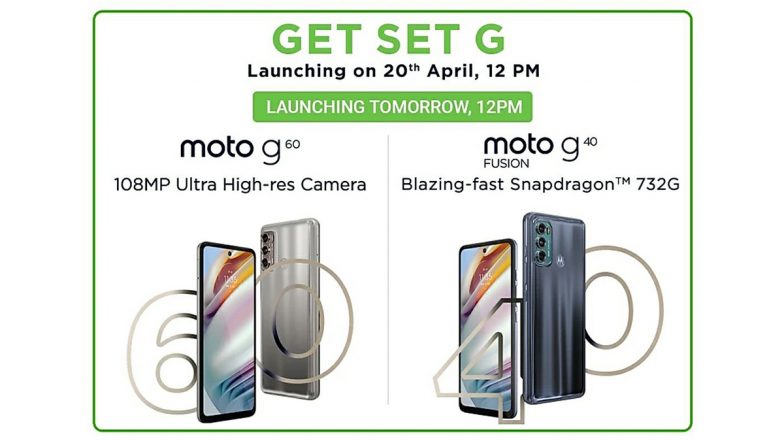 #GetSetG with the latest smartphones that love adventures, challenges, and explorations just like you! #GoBeyond with #motog60 or #BlazeOn with #motog40fusion, and head to a whole new journey together. Launching tomorrow, at 12 PM on @Flipkart! https://t.co/5WurqYwqSW pic.twitter.com/4rQgNs8t1B

Both the phones will be fuelled by a 6,000 mAh battery. These handsets will run on the latest Android OS offering a near-stock Android experience. Additionally, the company has collaborated with ThinkShield offering end-to-end mobile security solutions.

(The above story first appeared on LatestLY on Apr 19, 2021 11:11 PM IST. For more news and updates on politics, world, sports, entertainment and lifestyle, log on to our website latestly.com).