The recently launched Motorola Edge 20 smartphone was slated to go on sale on August 24, 2021. In a new development, the online sale has been deferred indefinitely due to unforeseen circumstances. Instead of online sale, the smartphone will be available for pre-orders on the said date. 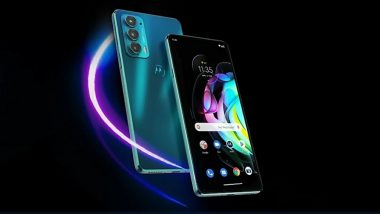 Motorola India launched the Motorola Edge 20 series in the country earlier this week with prices starting from Rs 21,499. In India, Motorola Edge 20 series comes with two variants - Edge 20 Fusion and Edge 20. The latter was set to go on sale on August 24, while the former is scheduled for sale on August 27. With less than four days to go on sale, the Lenovo-owned smartphone brand has now confirmed that the first online sale of the Motorola Edge 20 has been deferred, and a new date will be announced later. However, the company didn't reveal the exact reason why the sale has been postponed indefinitely. Instead of the new sale date, the phone will be up for Pre-orders from August 24, 2021, via Flipkart. Motorola Edge 20 Pro To Be Launched in India Soon, Confirms Company's Country Head.

It's worth noting that this only affects the Edge 20 smartphone. The Motorola Edge 20 Fusion which is slated to go on sale on August 27 will happen as planned. Interested buyers can get their hands on the device via Flipkart at 12 pm IST.

Go ahead and pre-order the slimmest 5G phone on 24th August starting at 12pm on Flipkart pic.twitter.com/3n3SHXC2Hu

In an official statement, the company said, “We are glad to see the overwhelming response that we have received from media and consumers for both our recently launched Edge 20 series products. However, due to unforeseen circumstances, we have had to defer the sale date for Edge 20, which we will announce shortly,” Motorola said in a statement.

The Motorola Edge 20 comes as a single variant with 8GB of RAM and 128GB of onboard storage. It is priced at Rs 29,999. It comes in two colours - Cyber Teal and Electric Graphite.

A phone designed to fit in the slimmest of pockets! #FindYourEdge with the slimmest and lightest 5G phone in India at just ₹29,999. Head over to @Flipkart as the pre-orders start on 24th Aug, at 12 PM. https://t.co/OHhgRzO7P7 pic.twitter.com/NCJcIxzyPF

As for specifications, the Motorola Edge 20 sports a 6.7-inch FHD+ OLED Max Vision display with a resolution of 1080x2400 pixels. It comes powered by an octa-core Snapdragon 778G SoC, paired with 8GB of RAM. For photography, there is a triple rear camera, which consists of a 108MP primary sensor. The remaining two sensors are an 8MP secondary sensor and a 16MP ultra-wide lens. The phone has a 32MP snapper upfront for taking selfies as well as video calls. It packs a 4,000mAh battery with 30W TurboPower fast charging. The phone runs on Android 11 with MyUX on top.

(The above story first appeared on LatestLY on Aug 21, 2021 10:00 PM IST. For more news and updates on politics, world, sports, entertainment and lifestyle, log on to our website latestly.com).