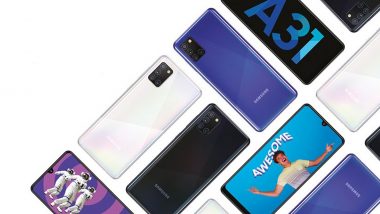 The South Korean Smartphone maker is all set to reveal the Galaxy A31 Smartphone in India. The online launch event will commence at 2 pm IST through Samsung India's official website, Facebook & YouTube channel. The Galaxy A31 was launched globally in March this year & will be introduced in India as a successor to the Galaxy A31 handset. Users can also watch the live broadcast here through the below embedded video. Samsung Galaxy M01 & Galaxy M11 Officially Launched in India; Prices, Variants, Features & Specifications.

The smartphone is expected to go on sale through Flipkart & will be available via offline channels as well. In terms of specifications, the Galaxy A31 will feature a 6.4-inch FHD+ Infinity-U waterdrop notch display with a resolution of 2400x1080 pixels. Powered by MediaTek Helio P65 chipset, the mobile phone will come packed with a 5,000mAh battery with 15W fast charging support.

A 5000mAh battery lets you do more with your Galaxy A31. Tell us how you will use the long lasting battery of the Galaxy A31 and stand a chance to win exciting prizes. #AwesomeGalaxyA31 #ContestAlert #Samsung

The handset is likely to be offered with 4GB RAM + 64GB storage & 6GB RAM + 128GB storage variants. For photography, the Galaxy A31 could house a quad rear camera setup sporting a 48MP main camera, an 8MP secondary sensor, a 5MP macro snapper & a 5MP depth sensor. In addition to this, the smartphone will also get Wi-Fi, 4G LTE, Bluetooth, GPS/A-GPS support. Coming to the pricing, the Galaxy A31 is likely to be priced from Rs 23,000.

(The above story first appeared on LatestLY on Jun 04, 2020 01:15 PM IST. For more news and updates on politics, world, sports, entertainment and lifestyle, log on to our website latestly.com).