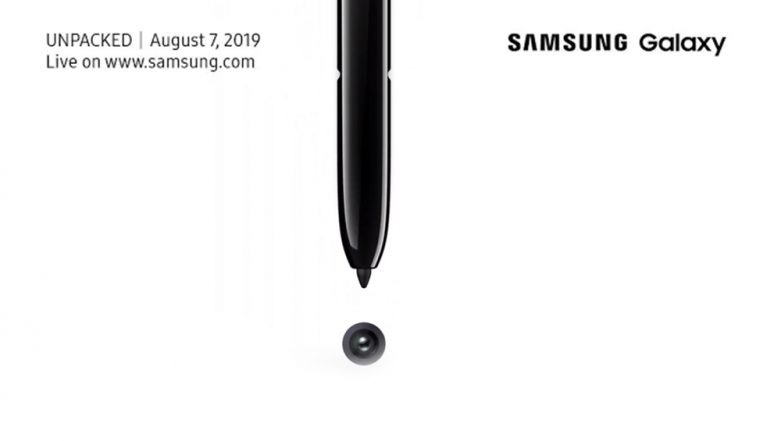 Samsung, the South Korean tech major has officially announced another Galaxy Unpacked event, which is scheduled to happen on August 7, 2019. It is believed that the phone maker will be launching Galaxy Note 10 smartphone at the event. The forthcoming unpacked event will be taking place in New York at Barclay's Center in Brooklyn, New York. The event is scheduled to begin at 4PM ET (1:30 AM IST). It is also believed that the smartphone giant could unveil a bigger Galaxy Note 10 or Galaxy Note 10+ at the launch event. Samsung Galaxy A80 India Launch This Month; To Get Rotating Triple Camera & Snapdragon 730G SoC.

Moreover, the company has also released a teaser video that showcases an all-new S Pen Stylus revolving around a single camera lens hinting that the phone will sport an Infinity-O Display. Also, the company has started sending out official invites, but it doesn't reveal any confirm details as such.

Going by the rumours, Samsung is likely to launch Galaxy Note 10 in two different sizes this time around. The name convention remains unclear, but it is speculated that the phone will be seen in Galaxy Note 10 and Galaxy Note 10 Pro avatars. Some reports also claim that the company is also working on Galaxy Note 10+ smartphone.

Time to level up. Galaxy Unpacked on August 7, 2019. #SamsungEvent pic.twitter.com/2CtFPjFCAr

On the specification front, Samsung Galaxy Note 10 will sport a 6.28-inch display screen whereas the bigger version of Galaxy Note 10 will reportedly carry a 6.75-inch display. Additionally, the smartphones are likely to be 5G versions. We won't be seeing Bixby button and 3.5mm headphone jack, if the recent rumours are to be believed.

Additionally, the top-end model will also get a Time-of-Flight (ToF) camera apart from the triple rear camera setup. On the pricing front, the new Galaxy Note 10 is rumoured to be priced around $1,100 - 1,200 (which will be around Rs. 76,000 to 82,700). It is also speculated that the technology giant could use Galaxy Unpacked event to announce the launch date for the delayed Galaxy Fold.