SecureTeam10, a YouTuber has posted a strange video which shows an alien tank and they are now holding a belief that aliens are living in the lunar surface. 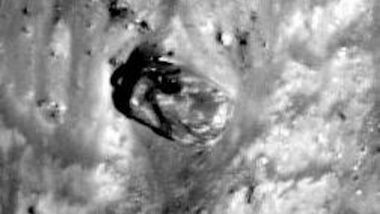 While alien existence s still debatable and heavy research on it continues, there have been suggestions that there could be a possible war between humans and extra-terrestrials. There have been several conspiracy theories woven against substantial research and if the recent images are to be believed then maybe some of them may have been fruitful after all. Alien hunters have found an image resembling an ancient tank on the surface of the moon.

SecureTeam10, a YouTuber has posted a strange video which shows an alien tank and they are now holding a belief that aliens are living in the lunar surface. Not just living but the extraterrestrials are also watching every activity of humans on the Earth. The YouTuber is known for uploading videos on UFO sightings and alien findings. In their new video, they talk of this tank like structure on the moon. They have carefully edited the image for better clarity to the viewer. He goes on to explain that how this shape is anything but a natural one. “It very well could be just an oddly shaped boulder, but I want you guys to notice the artificial nature of it. If look at an actual tank from a bird’s eye view, you’ll see the tank and the turret on top, and this exhibits very similar features to the tanks that we see on Earth,” he says.

Check out the video which shows the alien tank:

As soon as the video was posted, it became viral on the social media platforms, given the possibilities it expressed. The video has already got over a million of views. The conspiracy theorists went on to then state that the aliens already have a strategy in mind and are thus monitoring human activities. They state that aliens will soon attack humans to capture the resources on Earth.  They warned the concerned authorities and officials to find a way to defend in future when aliens attack Earth. But these are again just theories posted on the internet. NASA has been for years conducting indepth research about the presence of aliens in the universe. For all we know, this could be just an image analysis gone wrong. There is not enough conclusive evidence for an oncoming war on us.

(The above story first appeared on LatestLY on May 14, 2018 09:39 PM IST. For more news and updates on politics, world, sports, entertainment and lifestyle, log on to our website latestly.com).