Asteroid 2020 KF to Pass By Earth Today, Is It Dangerous? Will It Cause Doomsday? Here's All You Need to Know About This Massive Space Rock 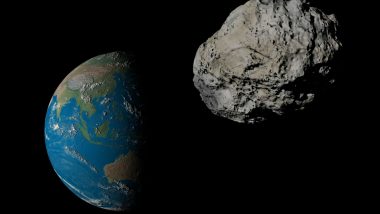 Coronavirus, cyclone and now an asteroid flying past the planet today, are we missing anything more disastrous?  In fact, not one but four space rocks are about to make a flypast the planet. All of them are in NASA's 'close approach' list. One of them making a flyby tonight is the 2020 KF. As per the space agency, NASA's Center for Near-Earth Object Studies (CNEOS) the asteroid will pass on June 3 at 12:00 p.m. EDT, ie 9.30 PM IST. This morning, another asteroid named 2020 KE4 made its flyby from about 1.8 million miles away. Ahead of the approach, let us know about this asteroid 2020 KF and is it dangerous or as they say, a doomsday bringing rock?

Asteroid 2020 KF is the biggest of the four space rocks with 144-foot in size. It is flying at a speed of 24,000 miles per hour. 2020 KF will fly from some 2.9 million miles away tonight around 9.30 PM IST. A few hours after 2020 KF, another rock Asteroid 2020 KJ1 will flu from 1.3 million miles away, it is smaller compared to the former. Scientists have said that there is no danger from these space rocks and most likely they will burn out in the atmosphere. NASA marks Near-Earth Objects, all those that come within a specific range of 30 million miles from the Earth's orbit. So it is far from human terms but close to scientific calculations.

Often the reports of these space rocks are twisted to create fear among the people. A massive asteroid 1998 OR2 which passed by the planet on April end was also said to be a life-ending space rock. However, it successfully flew past about 6.3 million kilometers of our planet. Unlike that one, there won't be an observatory path and streaming for this rock. But, there is another update on the next flyby too. Asteroid 2002 NN4 will be making a flypast later this week, on June 6. So you are likely to come across reports of asteroid crashes and doomsday but do not believe in these reports.

(The above story first appeared on LatestLY on Jun 03, 2020 02:36 PM IST. For more news and updates on politics, world, sports, entertainment and lifestyle, log on to our website latestly.com).