Halloween 2020 Full Blue Moon Date and Timings: Rare ‘Once in a Blue Moon’ Event on October 31, Know How to Watch the Hunter’s Blue Moon for an Extra-Spooky Night!

A ‘once in a Blue Moon’ celestial event, in this article, we will know more about the October 31 Blue Moon, date and timings, how to watch the event, and more for an extra-spooky night on Halloween 2020. 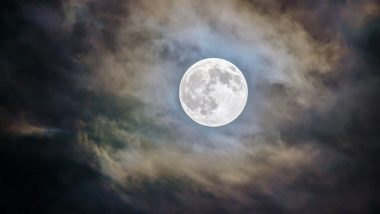 Halloween 2020 is approaching and this year is about to get spookier since 1994! No matter how difficult this year has been, 2020 is full of rare celestial events and surely a great time for stargazers. This month, we were treated well as the planetary positions allowed us to view the Red Planet Mars. As the spookiest festival of the year is approaching, it is time for October’s second full Moon—Blue Moon, rising on Halloween 2020 night. Are you excited? Well, we know we are! The rare Blue Moon coming up at the end of this month is known as Hunter’s Moon, and it will be the first Blue Moon to appear in the night sky on Halloween since 1944. Now that’s interesting! A ‘once in a Blue Moon’ celestial event, in this article, we will know more about the October 31 Blue Moon, date and timings, how to watch the event, and more for an extra-spooky night on Halloween 2020.

According to the National Aeronautics and Space Administration (NASA), typically each month has only one Full Moon, but when it appears twice in one calendar month, it is known as a Blue Moon, and it only happens every two or three months. October’s first full Moon is called the Harvest Moon, while the second and upcoming one is called the Hunter’s Moon. It is important to note here that the Blue Moon will not have a blue hue; in fact, it appears pale grey and white, just like the Moon on any other night. But the rarely actual blue-tinted Moons due to the particles are thrown into the atmosphere by natural catastrophes such as wildfires or volcanos.

Hunter’s Blue Moon on Halloween: How to Watch?

In 2020, we have 13 full moons to occur in the night sky. In modern times, most of us know Blue Moons as the second full Moon of a calendar month. There was a Blue Moon in 2015 and two in 2018. But a full Moon occurring on Halloween is not a common occurrence and only happens in every 18 to 19 years, a pattern known as the Metonic cycle. A Halloween full Moon had not appeared for everyone in all time zones since 1944, which makes the event rare and special.

The appearance of Blue Moon can vary by time zone, but look up at the night sky on Halloween 2020 night; you will be able to see the Hunter’s, Blue Moon. Check your adjusted time-zone. In India, Halloween 2020 Blue Moon will appear on October 31, after 8:00 pm. You can look at the Moon with your naked eye, but photographers should note that the Moon will be bright, so decrease the exposure so that you can capture the tiniest details of the Moon. According to astronomers, the next Halloween full moon is expected in 2039, 2058, 2077 and 2096.

(The above story first appeared on LatestLY on Oct 24, 2020 02:41 PM IST. For more news and updates on politics, world, sports, entertainment and lifestyle, log on to our website latestly.com).