Harvest Moon 2020 Date and Time: Know Everything About The Full Moon of October and Why It is a Rare One? 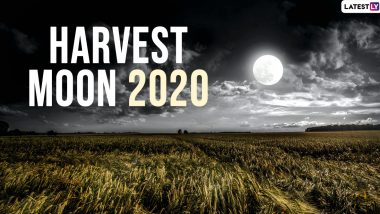 We near another calendar month, which means it is time for another full moon occurence. The next full moon will appear this week, on October 1, Thursday. So the month of October itself starts with a full moon, which also means that there will be two full moons in this month. Thus it is a rare occurence, that takes place once after three years or so. The first full moon of October is called the Harvest Moon. Let us know more about Harvest Moon 2020, the dates, timings and what makes it so rare. Corn Moon 2020 Graces The Night Sky! See Pictures And Videos of the September Full Moon.

The month of October starts with a full moon. So Harvest moon will appear in the night skies of October 1 intercepting October 2. It will peak at 5:05 p.m. EDT on Thursday. In Indian Standard Time it will be at 2:35 AM, October 2, Friday.

The first moon that appears in this month is called the Harvest moon. The second occurrence of full moon which will take place on October 31 is called the Hunter Moon. The moon closest to the autumnal equinox is called as the Harvest Moon. Every name for a full moon is based on some seasonal changes. For the early Native Americans, this was a time when farmers set out to harvest their crops. They used the light of the moon to direct them as they stayed up late into their farms, thus it gets the name Harvest Moon.

Having two moons in a month is also not a common phenomenon, which is what makes Harvest Moon a rare one. This moon is said to rise at the time of sunset, which is almost 50 minutes earlier than on an average day. The full moons in autumn do rise early. This time, with the harvest moon one can also see Mars in the sky. So sky watchers get our your gear as the rainclouds move away you may get to see the moon and stars more clearly.

(The above story first appeared on LatestLY on Sep 28, 2020 04:18 PM IST. For more news and updates on politics, world, sports, entertainment and lifestyle, log on to our website latestly.com).