When the Mars Perseverance rover lands on the Red Planet on February 18, it will not only collect stunning images and rock samples, the data it returns may also include some recorded sounds from Mars which will the first-ever sound clips from any planet, NASA has revealed. 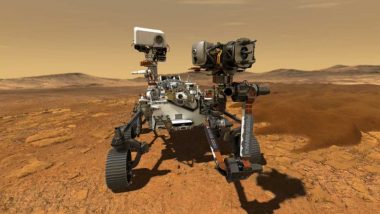 Washington, Jan 14: When the Mars Perseverance rover lands on the Red Planet on February 18, it will not only collect stunning images and rock samples, the data it returns may also include some recorded sounds from Mars which will the first-ever sound clips from any planet, NASA has revealed.

The rover carries a pair of microphones which -- if all goes as planned -- will provide interesting and historic audio of the arrival and landing at Mars, along with sounds of the rover at work and of wind and other ambient noise. NASA's Perseverance Rover Will Take Names of 11 Million People to Mars.

"It is stunning all the science we can get with an instrument as simple as a microphone on Mars," said Baptiste Chide from NASA's Jet Propulsion Laboratory and a contributor to the ‘SuperCam' microphone.

The way many things sound on Earth would be slightly different on the Red Planet.

That's because the Martian atmosphere is only 1 per cent as dense as Earth's atmosphere at the surface and has a different makeup than ours, which affects sound emission and propagation.

"But the discrepancy between sounds on Earth and Mars would be much less dramatic than, for example, someone's voice before and after inhaling helium from a balloon," the US space agency said in a statement.

One microphone aboard Perseverance, located on the SuperCam instrument atop the rover's mast, will be used for science and to record audio of Perseverance and natural sounds on Mars.

It will capture sounds of the rover's laser turning rock into plasma when it hits a target to gather information on rock properties, including hardness.

Since the SuperCam microphone is located on the rover's remote sensing mast, it can be pointed in the direction of a potential sound source.

An additional experimental microphone aboard the rover will attempt to record sounds during the mission's super-tricky entry, descent, and landing (EDL).

It may capture, for example, sounds of pyrotechnic devices firing to release the parachute, the Martian winds, wheels crunching down on the Martian surface, and the roaring engines of the descent vehicle as it flies safely away from the rover.

"We put a little grid at the end of the microphone to protect it from Martian dust," said Dave Gruel from JPL.

"I think it's going to be real neat to actually hear sounds from another planet."

The Mars 2020 mission is part of a larger programme that includes missions to the Moon as a way to prepare for human exploration of the Red Planet.

Charged with returning astronauts to the Moon by 2024, NASA will establish a sustained human presence on and around the Moon by 2028 through NASA's Artemis lunar exploration plans.

(The above story first appeared on LatestLY on Jan 14, 2021 12:00 PM IST. For more news and updates on politics, world, sports, entertainment and lifestyle, log on to our website latestly.com).