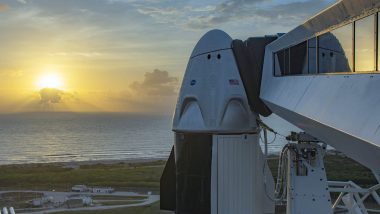 Florida, May 30: American space agency NASA and Elon Musk's SpaceX have collaborated to send astronauts Douglas Hurley and Robert Behnken to the International Space Station (ISS) in a historic launch. The two astronauts of NASA will travel to space via SpaceX Crew Dragon spacecraft. The launch is scheduled for 3:22 pm EDT. According to local time in India, the historic launch will take place 12:52 am on May 31. The official website of NASA will host live streaming of SpaceX Demo-2 mission launch. Scroll down to watch the live telecast of the NASA-SpaceX Demo-2 mission launch. SpaceX’s Crew Dragon Launch With NASA Astronauts: All You Need To Know About Mission Demo-2.

The SpaceX Falcon 9 rocket, carrying SpaceX Crew Dragon spacecraft, will be lit off from Launch Complex 39A at NASA's Kennedy Space Center in Florida. The mission, also dubbed Launch America, is named "Crew Demo-2". The SpaceX Demo-2 mission will mark the first launch of astronauts on an American rocket from American soil since the last space shuttle mission in 2011.

The launch was initially scheduled for May 28. However, it was postponed due to bad weather. The countdown was halted less than 17 minutes before the SpaceX Falcon 9 rocket was due to lift off. If SpaceX succeeds in sending astronauts to space, it would also be the first time ever that a privately developed spacecraft launched humans into Earth's orbit. Demo-2 is the first crewed mission for the US space agency's Commercial Crew Programme.

According to NASA, the purpose of this demonstration mission is to show SpaceX's ability to ferry astronauts to the space station and back safely. The Demo-2 mission will provide critical data on the performance of the Falcon 9 rocket, Crew Dragon spacecraft, and ground systems, as well as in-orbit, docking, and landing operations.

(The above story first appeared on LatestLY on May 30, 2020 11:00 PM IST. For more news and updates on politics, world, sports, entertainment and lifestyle, log on to our website latestly.com).