NASA Tourism: International Space Station to be Opened For Tourists by 2020, Hires SpaceX and Boeing For Commercial Operation

The National Aeronautics and Space Administration (NASA) on Friday said that it will open the International Space Station (ISS) to business ventures including the much-awaited space tourism- which is priced at USD 35,000 a night- as it seeks to be financially free from the space research lab. 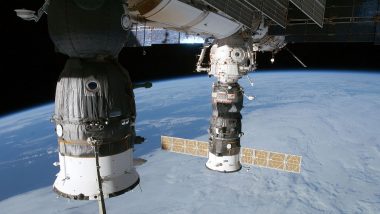 Washington, June 7: The National Aeronautics and Space Administration (NASA) on Friday said that it will open the International Space Station (ISS) to business ventures including the much-awaited space tourism- which is priced at USD 35,000 a night- as it seeks the space research lab to be financially free. NASA Opens Opportunity To Visit Mars, Here's How You Can Book Your Name.

"NASA is opening the International Space Station to commercial opportunities and marketing these opportunities as we've never done before," Jeff DeWitt, NASA chief financial officer, said in New York. According to deputy director of the ISS Robyn Gatens, there will be two private astronauts mission per year which will stay up to 30 days.

.@Space_Station is open for commercial business! Watch @Astro_Christina talk about the steps we're taking to make our orbiting laboratory accessible to all Americans. pic.twitter.com/xLp2CpMC2x

NASA said that the private commercial firms would be responsible for determining the crew and ensuring that their astronauts meet the medical and other training requirements for the spaceflight. The two firms hired by NASA are Elon Musk's SpaceX, which will use its spacecraft called Dragon Capsule, and Boeing, which will use its Starliner.

SpaceX and Boeing will reportedly charge private astronauts "taxi fare" which would be close to USD 60 million per flight. Notably, United States businessman Dennis Tito in 2001 became the first tourist to visit when he paid Russia nearly USD 20 million for a round trip.

The recent announcement of NASA is a move towards privatisation of ISS. This comes after United States President Donald Trump, last year, presented a budget which called that ISS to be defunded by the government by 2025.

(The above story first appeared on LatestLY on Jun 08, 2019 12:12 AM IST. For more news and updates on politics, world, sports, entertainment and lifestyle, log on to our website latestly.com).