The month of August will witness the Sturgeon Moon, which will be the fourth supermoon in a row and the last one of 2022. This lunar show in August is named after North America’s largest fish, the sturgeon. Scroll down to know all the essential details about the celestial event. 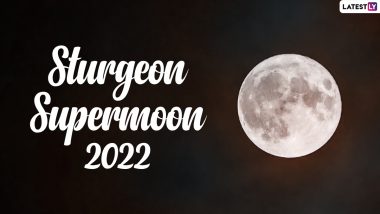 For all the lunar lovers, the final supermoon of this year is quickly approaching. The fourth supermoon of 2022, known as the Sturgeon Moon, will splash on the night sky on Friday, August 12. Some sources claim that the upcoming supermoon, meaning the full moon, will occur while the moon is nearest to its closest point to Earth. This phenomenon is called perigee. The Sturgeon Moon 2022 will appear within 90% of the perigee, which is why the event is known as a 'supermoon' as per the scientific definition. Intrestingly, the August supermoon will be witnessed during the Perseid Meteor Shower, considered the best meteor storm of this year, according to NASA. The meteor shower peak will occur on August 13, and it will remain active till August 24. Continue reading to know more about the timing, visibility, live telecast deets and why it is called a Sturgeon Moon. Astronomical Events in 2022: From Total Lunar Eclipse in May to Partial Solar Eclipse in October, Check Full List of Celestial Event Calendar.

The bright supermoon will illuminate the night sky on Friday, August 12, in the United Kingdom and around the sphere. If you cannot watch the supermoon at its peak due to weather disturbances, it will emerge full at the weekend. The Sturgeon Moon will be visible on 9:36 pm EDT, i.e. at 7:06 am on August 12.

All the celestial enthusiasts to witness the last supermoon on the night skies,  point your eyes to the southeast skies to catch a glimpse of the moon rising. You can also watch the live streaming of the lunar event by clicking on the Youtube link below.

According to the Old Farmer's Almanac, the names of all the full moons are decided as per the places, including Native American, Colonial American and European sources. The August Lunar show got the name Sturgeon Moon because the sturgeon species fish mainly were caught during this part of the year from the Great Lakes and Lake Champlain. The large group of the fish are called living fossils as they have remained almost unchanged for more than a hundred million years. Star gazers will not need special equipment to watch the entire moon event as the unaided eyes are perfect. But for close-ups, get a pair of binoculars ready.

(The above story first appeared on LatestLY on Aug 11, 2022 07:06 PM IST. For more news and updates on politics, world, sports, entertainment and lifestyle, log on to our website latestly.com).