What Are Vampire Bats? Do They Drink Blood of Their Preys? Know Everything About These Flying Mammals Who Are Experts at Social Distancing

A recent finding suggests that Vampire Bats are experts at social distancing when they are sick or even slightly detect an illness. The word vampire in their name instant connects if they are blood-sucking creatures. Yes, they are! In this article, let us understand more on these species of flying mammals. 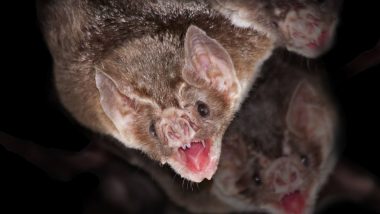 Bats have formed an impression of fear among everyone these days. With the initial possibilities expressed of these mammals being responsible for spreading the deadly COVID-19, people began to hate on these species. Now a new study on a kind of mammal from the same family has garnered interest. A recent finding suggests that Vampire Bats are experts at social distancing when they are sick or even slightly detect an illness. The word vampire in their name instant connects if they are blood-sucking creatures. Yes, they are! In this article, let us understand more on these species of flying mammals. A few months ago, viral pics of large bats, being called 'Human-Sized',from Philippines were scaring people.

What Are Vampire Bats?

Vampire bats belong to the family Desmodontinae. These leaf-nosed bats are found in Central and South America more commonly. Their main source of food is blood which is why they get the name vampire bat. They are the only mammals that have an evolved pattern to drink blood of other animals for survival. They feed on other birds, pigs, horses and even cows!

But unlike sucking blood, these bats make a cut with their teeth and then feed on the blood with their tongues. They can drink blood from an animal for more than 30 minutes, without even waking the animal up, because they are so light! So they do not always hurt their prey. In fact, these bats also help other bats in the community by regurgitating blood to feed them. Dog-Faced Bat Goes Viral as Tweeple Cannot Wrap Their Heads Around the 'Bizarre' Creature! Know More About Buettikoferi Epauletted Fruit Bat and How They Balance Our Ecosystem.

They have short conical muzzles and sharp front teeth which are specialised for making a cut. They're evolved so differently that they can recognise the sound of breathing of sleeping animals and that's how they find their preys. Vampire bats can walk, jump, and even run by using a unique, bounding gait. They live in colonies in completely dark places like old caves and hollow trees. These bats only hunt when it is completely dark and emit low-energy sounds.

The recent study brings them in new light about how they start maintaining a social distance when they detect they are infected. But for all that's being associated with bats, it is not a good thing to hate on them as they plan an important role in ecology. Coming to vampire bats, they do not bite humans and instances of them biting or attacking a human for blood are very rare, rather negligible.

(The above story first appeared on LatestLY on Oct 29, 2020 11:59 AM IST. For more news and updates on politics, world, sports, entertainment and lifestyle, log on to our website latestly.com).