The bats are supposedly mentioned as "human-sized" and the pictures have freaked out netizens. Well, we wouldn't blame them entirely as the pictures definitely look scary, but are they for real? Yes, these are known as Giant Golden-Crowned Flying Fox. While the species are very much in existence, they are not human-sized. Know more. 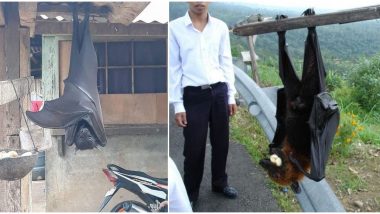 These days bats can freak people out so much, ever since the outbreak of coronavirus. Amid the pandemic that continues to spread across the world, pictures of large-sized bats from Phillippines have been shared online. The bats are supposedly mentioned as "human-sized" and the pictures have freaked out netizens. Well, we wouldn't blame them entirely as the pictures definitely look scary, but are they for real? Yes, these are known as Giant Golden-Crowned Flying Fox. While the species are very much in existence, they are nowhere close to the size of humans. The pics that are going viral are taken from an angle to make them look bigger. We tell you more about these species. Giant Lizard That 'Eats Anything It Wants' Seen in Georgia, Know More About This Argentina Tegu Species.

Picture of these bats have emerged online time and again. This time Twitter user Alex (@AlexJoestar622) posted two pics on his feed about these giant birds found in Phillippines. Someone else also posted a few other pictures of these giant birds in comments. In these pictures, the birds sure look intimidating, but the mention of the words "human-sized" spread more fear among people. Alex then clarified that they are not actually human-sized but their wingspan is huge and not their height. Don’t Hate Bats and Pangolins During This Pandemic! Here’s Why We Should Know the Importance of These Animals.

Remember when I told y'all about the Philippines having human-sized bats? Yeah, this was what I was talking about pic.twitter.com/nTVIMzidbC

Some More Pics of The Huge Bats:

Many people were scared by looking at these tweets but not all the above pictures may be authentic. Now that you have seen how intimidating it looks, let us understand more about these species.

Giant golden-crowned flying fox or the golden-capped fruit bat are called as megabat. They are endemic to Phillippines. These are one of the largest bat species in the world that weigh about 1.5 kgs. They are frugivorous, which means consuming any kind of figs. They are predated upon by eagles and pythons. They have become an endangered species because of their poaching and also deforestation. They have a wingspan of 5 to 6 feet long. These species have the longest forearm length measuring upto 215 mm. Like other bats, these are also nocturnal and have solitary behaviours. Not much is known about the reproduction cycle of these bats, but females are said to reproduce one litter per year.

(The above story first appeared on LatestLY on Jul 07, 2020 04:00 PM IST. For more news and updates on politics, world, sports, entertainment and lifestyle, log on to our website latestly.com).