Chimpanzees are one of the four types of great ape that include bonobos, gorillas and orangutans. As we celebrate World Chimpanzee Day 2020 on July 14, here we bring you some interesting and lesser-known facts about the chimps, to celebrate humankind’s closest living relative. 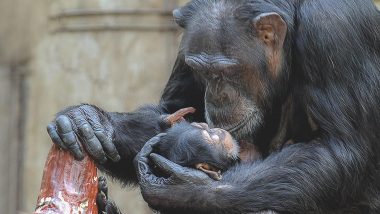 Chimpanzees are one of the four types of great ape that include bonobos, gorillas and orangutans. They are said to be one of our closest relatives in the animal kingdom. Humans share between 95 and 98 percent of DNA with them. Interesting, right? Just like us, they use tools to achieve their goals, laugh with one another and also form social groups. To honour humankind’s closest living relative, World Chimpanzee Day is celebrated on July 14. The reason, this date was chosen was because, Jane Goodall, the primatologist who is considered to be world’s foremost experts on chimps, first stepped foot in the now Gombe Stream National Park, Tanzania, to study wild chimpanzees in 1960. As we celebrate World Chimpanzee Day 2020 on July 14, here we bring you some interesting and lesser-known facts about the chimps, to celebrate humankind’s closest living relative.

1. By now, we all know, that the animal represents one of our closest living relatives. Chimps are one of only two species in the genus, Pan, the other being the bonobo and we are closely related to both the species. Biologists also believe that humans, chimps, and bonobos shared a common ancestor, millions of years ago. Chimpanzee Scrolling Through Instagram Feed.

2. Chimps are highly adaptable species, and the animal inhabits a range of habitats, including tropical rainforest, swamp forest, less densely vegetated forest and every dry savanna.

3. Did you know, chimps can be taught human languages? A female chimpanzee called Washoe knew more than 240 signs.

4. Chimpanzees can catch or be infected with human diseases.

5. The oldest recorded chimp was Little Mamma, a captive female who was between 76 to 82 years old, when she died in 2017. Usually, chimpanzees in the wild rarely live longer than 50 years. Whereas, captive chimps can live for above 60 years.

6. Chimpanzees climb and swing through trees and get around by walking on all the four legs. But the animal can also walk upright on two feet, if they want to.

7. The size and composition of chimpanzees’ social groups change over time. They spend the majority of their time in small, temporary groups of just a few individuals called, ‘parties,’ but also associated with a wider group, ‘communities.’

8. Chimps laugh when they play and even groom each other. Scientists say that grooming relations within the community and even calms nervous or tense chimps.

9. The chimpanzees can be found in about 21 African countries, mostly in central Africa.

10. Chimps are omnivorous, but eat fruits more than anything else. Most of a chimp’s diet comes from the bits of plants such as seeds, leaves, roots, resin, but they also eat insects, honey, birds and bird eggs, mammals and even soil.

These are some of the most interesting facts about the chimpanzees that you may not have known. Let us celebrate our closest living relative in the animal kingdom, raise awareness about the threats they face in the wild and protect this magnificent species.

(The above story first appeared on LatestLY on Jul 13, 2020 02:25 PM IST. For more news and updates on politics, world, sports, entertainment and lifestyle, log on to our website latestly.com).