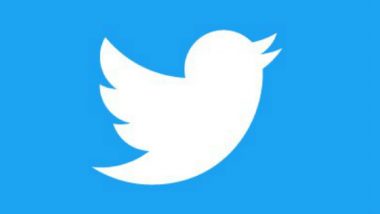 New Delhi, Aug 14: As India gears up to celebrate its 74th Independence Day, microblogging website Twitter on Friday has unveiled a specially designed emoji to honour the Indian Armed Forces, which is a vibrant depiction of the National War Memorial. The design of the emoji represents the innermost structure of the Memorial, called the 'Amar Chakra' or the 'Circle of Immortality'. The emoji will be live until 18th August and will be available in English and several Indic languages, such as Hindi, Tamil, Urdu, Kannada, Punjabi, Marathi, Malayalam, Bengali, Telugu, Gujarati, and Oriya. Twitter Fleets Introduced in India, Netizens React With Funny Memes and Jokes to New Snapchat Story-Like Feature.

"We hope this emoji will not only add to the Independence Day celebrations but will also encourage Indians across the world to learn more about and pay respects to the lives of India's brave soldiers," Mahima Kaul, Director, Public Policy, India and South Asia, Twitter said in a statement.

Twitter India is also supporting the Ministry of Defence's special initiative #SaluteTheSoldier that pays respects to the lives of Indian soldiers. The Ministry on its part has launched a dedicated Twitter account for the National War Memorial (@salute2soldier).

Defence Minister Rajnath Singh will be launching the emoji on the eve of Independence Day. Indians across the globe will be able to participate in Independence Day conversations and celebrate with the emoji using the hashtags like #IndiaIndependenceDay, #NationalWarMemorial, #SaluteTheSoldier and many more. This is the sixth edition of the Independence Day emoji by Twitter India, having featured creative symbols for the Ashoka Chakra, Red Fort, the Indian National Flag during the previous years. Twitter continues to observe Indian culture with celebratory initiatives and activations for Independence Day, Diwali, Republic Day, among other key Indian milestones, events and festivals.

(The above story first appeared on LatestLY on Aug 14, 2020 01:38 PM IST. For more news and updates on politics, world, sports, entertainment and lifestyle, log on to our website latestly.com).