The video game is a best-of-24 rounds attackers vs defenders fight in which players lock in their agent for the entire duration of the match & then attempt to win. 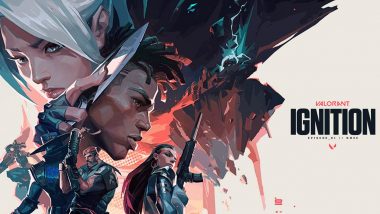 Riot Games developed Valorant, a 5v5 character-based tactical shooter video game is launched in India for all PC gamers. Valorant took Twitter to announce the launch of its video game. The game is also available in Europe, Turkey, Middle East & North Africa, Russia & other CIS Countries. Valorant has also given a gentle reminder that they are not supporting regional transfers at the moment. So, anybody who attempts to VPN into a different region to get early access to the game, there is no use of it. India doesn't have any committed Valorant servers. Unfortunately, the video game is not on steam, for those who are wondering how to download the game. Tencent Games Offers $148 Million To Acquire All Shares of Funcom: Report.

Users can go to Valorant's Official Website, hit the play button & sign up for a new Riot account. Once that is successfully done, the website will take you to the Valorant download page. The video game is a best-of-24 rounds attackers vs defenders fight in which players lock in their agent for the entire duration of the match & then attempt to win. For now, Valorant is only available on PC.

In 12 hours - Korea, Japan, and most of Asia-Pacific

Sukamal Pegu, Publishing Head of South Asia said: "Riot Games is highly committed to providing India and rest of the South Asia region with excellent gaming experience. While you'll be joining the worldwide launch on June 2, the official servers which will support the Middle East and South Asia will come later in the year".

(The above story first appeared on LatestLY on Jun 02, 2020 02:01 PM IST. For more news and updates on politics, world, sports, entertainment and lifestyle, log on to our website latestly.com).