Meta-owned messaging platform WhatsApp has started to roll out a new feature to some beta testers on iOS, which gives users the ability to search messages by date. 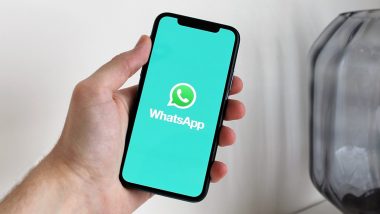 San Francisco, Dec 1: Meta-owned messaging platform WhatsApp has started to roll out a new feature to some beta testers on iOS, which gives users the ability to search messages by date.

The new feature allows users to easily jump to a certain date within a conversation, reports WABetaInfo. WhatsApp Bans Over 23 Lakh Malicious Accounts in India in October 2022 in Compliance With New IT Rules

Some beta testers can use this feature in their chats and groups, with the latest WhatsApp beta for iOS 22.24.0.77 update.

Users need to use the search feature in a conversation if they want to check whether the new feature has been rolled out to their account. WhatsApp Update: Meta-Owned App Announces To Launch 'Message Yourself' Feature in India Soon

If a calendar icon shows up, it means the feature is enabled on your WhatsApp account.

The feature will roll out to more users over the coming weeks, the report said.

Earlier this week, the messaging platform had launched the 'forward media with caption' feature on iOS, which provides users the ability to forward images, videos, GIFs and documents, with a caption.

After downloading the WhatsApp for iOS 22.23.77 update from the App Store, some users were able to access the new feature.

Additionally, if someone does not want to forward the caption, a dismiss button is provided to remove the caption from the image before forwarding the message.

(The above story first appeared on LatestLY on Dec 01, 2022 03:37 PM IST. For more news and updates on politics, world, sports, entertainment and lifestyle, log on to our website latestly.com).