Bangladesh became the first country to ban any of the drugs now known to be toxic to vultures since the previous veterinary diclofenac ban more than 10 years ago. It has been difficult to control the drug supply into these areas while it remained legally available elsewhere in the country. Hence, the countrywide banning of ketoprofen is such an important step. 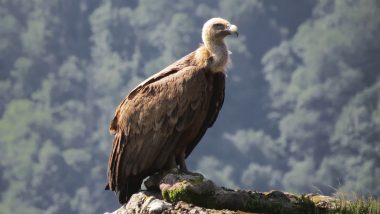 New Delhi, February 23: With Bangladesh banning painkiller ketoprofen used widely to treat the cattle, it became the first country to ban any of the drugs now known to be toxic to vultures since the previous veterinary diclofenac ban more than 10 years ago.

Ornithologists said this is a landmark initiative to save the small remaining population of Asia's globally threatened vultures -- an example for others like India, Pakistan, Nepal and Cambodia to follow. Vulture Takes a Ride on Paraglider's Selfie Stick in Spain, But Its Not What It Looks Like! Watch Viral Video of Parahawking.

Chris Bowden of the Royal Society for the Protection of Birds, who has been coordinating the programme in South Asia, told IANS: "Bangladesh is showing important leadership by banning ketoprofen across the country. This will go down as a major milestone in Asian vulture conservation."

According to Saving Asia's Vultures From Extinction (SAVE), ketoprofen has become the main anti-inflammatory drug used by vets in Bangladesh, so this represents a significant change, and the companies concerned are already stepping up production and improving their formulations of the safe alternative drug, meloxicam. International Vulture Awareness Day 2020: Fascinating Facts About The Birds Which Are Environmentally Necessary Creatures.

Non-Steroidal Anti-Inflammatory Drugs (NSAIDs) including diclofenac and ketoprofen are the primary threats to the vultures of South Asia, including Bangladesh. These drugs were responsible for the catastrophic 99.9 per cent declines of white-rumped vultures in the region.

When these NSAIDs are administered to cattle, and if the cow or buffalo dies within a few days and is consumed by vultures, it causes gout, kidney failure and death in the following days.

Ketoprofen was first demonstrated to be toxic to vultures in trials carried out in South Africa over 10 years ago. The first localised bans came in Bangladesh's two gazetted Vulture Safe Zones in 2017, covering around one-third of the country.

However, making this ban fully effective has been a challenge. Despite the bans and major awareness campaigns, the 2018 undercover pharmacy surveys conducted showed that 62 per cent of veterinary drug suppliers still offer ketoprofen, and that's only a 10 per cent reduction from earlier, said SAVE.

It has been difficult to control the drug supply into these areas while it remained legally available elsewhere in the country. Hence, the countrywide banning of ketoprofen is such an important step.

Rhys Green of Cambridge University, and Chair of SAVE said, "The governments of India, Pakistan, Nepal and Bangladesh were commendably quick to ban veterinary use of the vulture-toxic drug diclofenac over 10 years ago.

"Unfortunately though, they have been slow to ban any other drugs, despite evidence of their toxicity to vultures. Even aceclofenac, a pro-drug of diclofenac, is quickly converted to vulture-toxic diclofenac by the cow's metabolism, has not been banned yet."

He added: "Ketoprofen was shown to be toxic to vultures in 2009. Bangladesh has led the way, first by banning veterinary use of the drug in its two Vulture Safe Zones some years ago, and now by banning it throughout the country."

The vulture, a nature's scavenger, cleans the environment of animal carcasses. Villagers rely on them to dispose of cattle carcasses.

The reason, say biologists, for bringing the vultures to the brink of extinction in South Asia mainly to the extensive use of diclofenac in treating cattle.

Population of three of the nine Indian species of vultures -- the white-rumped, the long-billed and the slender-billed -- have crashed by 90 per cent in the mid-1990s. The birds are now listed as Critically Endangered by the IUCN, the highest threat category ahead of extinction.

The Indian government banned diclofenac veterinary use in 2006, and although this was a crucial step, it has not been fully effective, and there are also now other vulture-toxic drugs in use, warned scientists.

Last December Oman became the first country in the Arabian Peninsula to ban the veterinary use of diclofenac for the conservation of endangered species like vultures and other birds of prey.

(The above story first appeared on LatestLY on Feb 23, 2021 06:49 PM IST. For more news and updates on politics, world, sports, entertainment and lifestyle, log on to our website latestly.com).