Barack Obama on Death of George Floyd in Minnesota: Racism Cannot Be ‘Normal’ in US 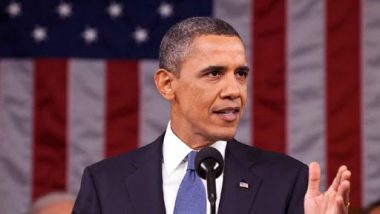 Washington, May 29: Former president Barack Obama said Friday he shared the "anguish" of millions of Americans over the death of a black man killed by police in Minnesota and that racism cannot be "normal" in the United States. "This shouldn't be 'normal' in 2020 America," Obama said of the death of Minneapolis man George Floyd and several other recent racial incidents in the country.

"It can't be 'normal,'" the first African-American president of the United States said in a statement. "If we want our children to grow up in a nation that lives up to its highest ideals, we can and must do better." Floyd's death on Monday sparked three nights of rioting in Minneapolis and protests against police brutality in other US cities. 'Rest in Peace George Floyd' Trends on Twitter, Netizens Offer Condolences With #BlackLivesMatter Message Amid Raging Protests Over His Death Across US.

My statement on the death of George Floyd: pic.twitter.com/Hg1k9JHT6R

Floyd, 46, died after a police officer kneeled on his neck for more than five minutes while he was handcuffed and on the ground. In his statement, Obama referred to Floyd's death but also two other high-profile recent racial incidents in the US, one involving a black jogger who was shot dead by two white men in Georgia and a black man who had a confrontation with a white woman while bird-watching in a park in New York.

"It's natural to wish for life 'to just get back to normal' as a pandemic and economic crisis upend everything around us," Obama said. "But we have to remember for millions of Americans, being treated differently on account of race is tragically, painfully, maddeningly 'normal' -- whether it's while dealing with the health care system, or interacting with the criminal justice system, or jogging down the street, or just watching birds in a park." Obama said Americans need "to work together to create a 'new normal' in which the legacy of bigotry and unequal treatment no longer infects our institutions or our hearts."

(The above story first appeared on LatestLY on May 29, 2020 11:24 PM IST. For more news and updates on politics, world, sports, entertainment and lifestyle, log on to our website latestly.com).