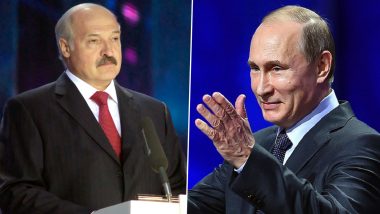 Minsk, August 15: Amid escalating protests in Belarus over the alleged rigged polls to re-elect President Alexander Lukashenko, Russia has hinted at intervention in the domestic crisis of the eastern European nation. The official statement by Kremlin came shortly after Lukashenko told top government officials that he would be reaching out to his Russian counterpart Vladimir Putin. Belarus Elections 2020 Row: Alexander Lukashenko Seeks Russia's Intervention, Warns of Protests Spreading Across Eurasia.

The two heads of nation held a phone conversation on Saturday, the Kremlin said. It was further stated that both the leaders discussed the crisis which has erupted in Belarus, and expressed hope that the issue would be swiftly resolved.

#UPDATE The Kremlin said Saturday that President Vladimir Putin and his Belarusian counterpart Alexander Lukashenko agreed in a phone call that the "problems" in Belarus would be swiftly resolvedhttps://t.co/Bqv7wAhT1t pic.twitter.com/7Vv1hcJsh9

Earlier today, Lukashenko was reported as saying by the state-run media that Putin's intervention is necessitated as the demonstrations underway in Belarus may spillover across the borders, to other countries of Eurasia as well.

“There is a need to contact Putin so that I can talk to him now, because it is not a threat to just Belarus anymore," he was quoted as saying by state news agency Belta. Lukashenko, since the start of agitation following the declaration of election results on Sunday, has blamed external forces of the "West" of stoking the unrest.

“Defending Belarus today is no less than defending our entire space, the union state, and an example to others … Those who roam the streets, most of them do not understand this," he added, days after referring to the locals who are joining the protests as "sheeps" being attracted to external influencers.

The protests in Belarus erupted after the August 9 poll results showed that Lukashenko has been re-elected with over 80 percent of the total votes. A large section of the country was in disbelief as the surveys pointed towards a clear edge for his rival Svetlana Tikhanovskaya. In the protests that are underway since, two have been killed and over 3,000 detained.

(The above story first appeared on LatestLY on Aug 15, 2020 06:21 PM IST. For more news and updates on politics, world, sports, entertainment and lifestyle, log on to our website latestly.com).