China Again Threatens To Take Taiwan by Force if Necessary

Amid the continuing tensions over Taiwan, China on Wednesday again threatened to take the democratic self-governing island by military means if necessary. 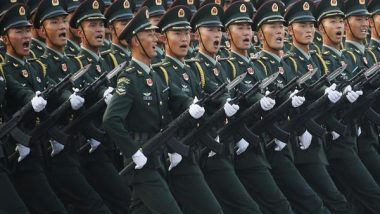 Beijing, August 10: Amid the continuing tensions over Taiwan, China on Wednesday again threatened to take the democratic self-governing island by military means if necessary. "We will work with the greatest sincerity and exert our utmost efforts to achieve peaceful reunification," dpa news agency quoted a white paper on the Taiwan issue published by the Chinese government as saying.

"But we will not renounce the use of force, and we reserve the option of taking all necessary measures. Use of force would be the last resort taken under compelling circumstances. We will only be forced to take drastic measures to respond to the provocation of separatist elements or external forces should they ever cross our red lines. China’s Trade With Russia Spikes Even as US President Joe Biden Warns Beijing of ‘Consequences’.

"Let there be no doubt, we will tolerate no foreign interference in Taiwan, we will thwart any attempt to divide our country, and we will combine as a mighty force for national reunification and rejuvenation.

"The historic goal of reuniting our motherland must be realized and will be realised," it said. China has repeatedly made similar threats regarding Taiwan in the past.

The latest tensions were triggered last week by a visit to Taipei by Speaker of the US House of Representatives Nancy Pelosi, who travelled there despite Beijing's fierce opposition.

In response, China launched war games including live-fire drills in six maritime areas around Taiwan. The Chinese leadership rejects such official contact by other countries with Taiwan because it regards the island as part of its territory. Taiwan, on the other hand, has long seen itself as independent.

(The above story first appeared on LatestLY on Aug 10, 2022 03:45 PM IST. For more news and updates on politics, world, sports, entertainment and lifestyle, log on to our website latestly.com).