Beverage major Coca-Cola has announced to discontinue production of 200 drink brands, which means half of its offerings won't be available. 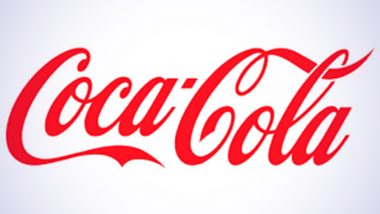 Washington, October 22: Beverage major Coca-Cola has announced to discontinue production of 200 drink brands, which means half of its offerings will no longer be available for customers, according to a report on Thursday by CNN. The report comes on the very day when Coca-Cola reported a 4 percent fall in its unit case volume for its Asia-Pacific market due to coronavirus-related restrictions in India and Japan. The company said it will focus more on more profitable drinks. Coca-Cola's Unit Case Volume Declines 4 Percent in Asia-Pacific Due to COVID-19 Restrictions in India and Japan.

The brands that would be cancelled have "little to no scale," and that their sales represent only 2 percent of total revenue, the CNN report quoted Coca-Cola Chairman and CEO James Quincey as saying. By reducing the number of drink brands, Coca-Cola aims to focus more on its core products like Coca-Cola Zero Sugar and on latest brands like Topo Chico Hard Seltzer, Coca-Cola Energy and AHA flavoured sparkling water. Hindustan Coca-Cola Beverages to Allow Permanent Work from Home.

Earlier this month, the company said it will retire select underperforming products by December 31, including TaB diet soda and ZICO coconut water in the United States. Other outgoing products in the US included those under Odwalla (announced in July), Coca-Cola Life and Diet Coke Feisty Cherry, as well as regional offerings like Northern Neck Ginger Ale and Delaware Punch.

"This isn’t about paring down to a specific number of product offerings under our brands. The objective is to drive impact and growth. It’s about continuing to follow the consumer and being very intentional in deciding which of our brands are most deserving of our investments and resources, and also taking the tough but important steps to identify those products that are losing relevance and therefore should exit the portfolio," Cath Coetzer, global head of innovation and marketing operations, had then said.

(The above story first appeared on LatestLY on Oct 22, 2020 09:30 PM IST. For more news and updates on politics, world, sports, entertainment and lifestyle, log on to our website latestly.com).