Horrifying pictures and videos of the damage have been shared on social media since morning. At least one building is said to have collapsed and nearly thousands of houses lost the power supply. 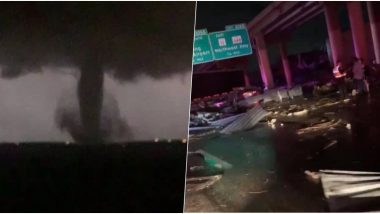 A large tornado swept through the city of Dallas in Texas last night causing severe damage and injuries. The heavy winds caused damage in the heart of the Dallas-Fort Worth metroplex after touch down around 7 pm CDT. It crossed through the Dallas' University Park and crossed on the Interstate 635. It continued to travel eastwards and the force of it has caused major damage. Horrifying pictures and videos of the damage have been shared on social media since morning. At least one building is said to have collapsed and nearly thousands of houses lost the power supply.

The tornado touched down near Love Field in north and northeast Dallas. Police are now going door-to-door in the Richardson region looking for those who were affected. There are reports of trees collapsing and roof of the houses majorly damaged. Fire officials said they were responding to multiple calls where people had been injured by broken glass. Photos and videos of the damage have been shared on social media by netizens. US Tornadoes 2019: Visuals of a Perfectly Intact Georgia House Surrounded by Total Devastation Go Viral (Watch Pic & Video).

Check Pics and Videos of Tornado Damage in Dallas:

Crazy footage out of #Dallas of tornado taking out power

That Looks So Scary!

Whoa... Insane view of Dallas tornado, that moved through moments ago. pic.twitter.com/Uzmzy2JGBA

Here's a Look at the Damage

Here's a look at just some of the storm damage in #Dallas. A store is demolished, as well destruction along Harry Hines near Walnut Hill Lane. https://t.co/ziHMTvOZib#NBCDFWWeather pic.twitter.com/8I4epX2JeZ

Look at the Speed of the Winds

My coworker took this video of the tornado, I’m shook 🤯 pic.twitter.com/nPObcO02sI

DFW showing the world how to do a lightning storm ⛈ #Dallas #Tornado pic.twitter.com/3YvHAqGXQu

So the pictures and videos are quite scary and one can only imagine the extent of damage it may have caused. It is believed the winds sped up to around 111 mph.  Severe thunderstorm warnings were issued for the Nevada and Kaufman County areas right after the tornado landfall. There have been no reports of fatalities as yet.

(The above story first appeared on LatestLY on Oct 21, 2019 11:51 AM IST. For more news and updates on politics, world, sports, entertainment and lifestyle, log on to our website latestly.com).