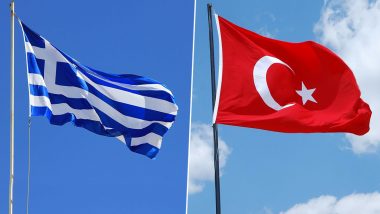 Ankara, September 22: Turkey and Greece on Tuesday have agreed to resume talks over contested maritime claims in the eastern Mediterranean. The Greece-Turkish over the issue will take place after four years. Last time when two countries discussed the matter diplomatically was in 2016. The development came after a call between the leaders of Turkey, Germany and the European Union, reported Al Jazeera. EU: Greece-Turkey Crisis Talks Might Include Other Nations.

On Monday, Greek government spokesman Stelios Petsas had told reporters, "We are close to restarting the exploratory talks. ... There will be an announcement when this is finalised, but the atmosphere is good." Germany, which currently holds the EU's rotating presidency, launched an effort in July this year to broker direct Greek-Turkish negotiations.

Most likely, Germany will participate in the discussions between both the countries. Notably, Greece and Turkey have been involved in a standoff at sea for weeks over maritime boundaries in an area between Turkey's coast, the ethnically divided island nation of Cyprus and several Greek islands that Greece claims as its jurisdiction.

(The above story first appeared on LatestLY on Sep 22, 2020 11:42 PM IST. For more news and updates on politics, world, sports, entertainment and lifestyle, log on to our website latestly.com).