H1B Visa Blacklisted Firms: List of 26 Companies Named as Willful Violators by US Department of Labour

The Trump Administration has been toughening the rules for visa holders who want to extend their stay in the U.S. 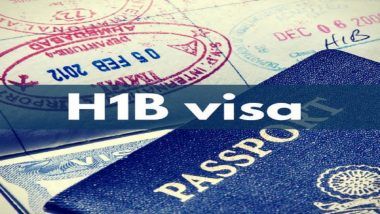 26 companies have been named as 'willful violators' of the H-1B visa system, according to the US Department of labour (DoL). This year, an Indian CEO was held for duping US visa authorities. He was charged with H-1B fraud on 200 counts. H1B Visa Lottery Process Gets More Stringent: Companies Hiring Foreign Employees Will Have to Do More Paperwork.

Some of the names in the list include- Temp Solutions, Telava Network, Supreme Tech Solutions, Global Telecom Corp, Anthony Information Technology, Amica Technology and other others firms. Check the complete list of 26 blacklisted companies whose names are included among the willful violators.

Marissa Beck, Individually and as President

This week, a new set of strict provisions were introduced to the H1-B visa, under which companies hiring foreigners to work in the US will have to pre-register electronically for the annual H-1B lottery. The new policy will involve additional paperwork in the already cumbersome process, including increased scrutiny, especially for employers like IT service companies.

The DonaldTrump administration is well-known for its hard-line anti-immigration stance. In 2017, the Trump administration was reported to have plans to curb H-1B visa extensions that could result in self- deportation of an estimated 500,000-750,000 Indian Americans. The H1B visa is issued for three to six years to employers to hire a foreign worker.

(The above story first appeared on LatestLY on Nov 28, 2018 04:38 PM IST. For more news and updates on politics, world, sports, entertainment and lifestyle, log on to our website latestly.com).