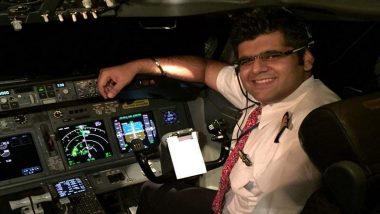 Jakarta, October 29: Bhavye Suneja was reportedly the captain of the Lion Air flight that crashed on Monday into the Java sea near Indonesia after takeoff. There were 188 passengers and crew member on board when the tragic incident took place. Suneja belonged to Delhi. As per media reports, Suneja was a resident of Mayur Vihar and studied at the Ahlcon Public School in the locality. In March 2011, he joined the Lion Air and was planning to return to India.

The Lion Air flight went missing just 13 minutes after taking off on Monday morning. The low-cost carrier’s flight was travelling from Jakarta to Pangkal Pinang in Indonesia. The Lion Air Flight JT 610 took off from the Jakarta airport at 6:20 am (Local time) and lost contact with air station at 6:33 am.  The plane crashed into the water about 30 to 40 metres deep into the sea. The Indonesian authorities have started a search and rescue operation.

The number of casualties is not reported yet. The plane was a new model – a Boeing 737 MAX 8. It had been in use for only two months. The same plane reported a “technical issue” on Sunday night, but had been cleared to fly on Monday, reported The Guardian. However, the exact cause of the crash is still not known.

(The above story first appeared on LatestLY on Oct 29, 2018 01:31 PM IST. For more news and updates on politics, world, sports, entertainment and lifestyle, log on to our website latestly.com).