Jimmy Lai, Hong Kong's Pro-Democracy Media Tycoon, Gets Bail Day After Being Arrested Along With Other China Critics 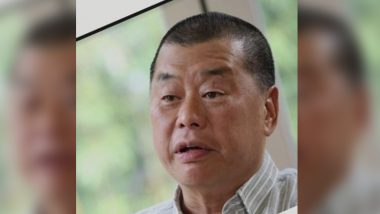 Hong Kong, August 11: Jimmy Lai, the pro-democracy media tycoon of Hong Kong, was granted bail a day after he along with scores of others were arrested by the law enforcement officials for violating the recently enacted National Security Law. Thr 71-year-old editor was charged with threatening the country's territorial integrity through his publication Apple Daily.

The authorities in Hong Kong confirmed on Tuesday that Lai was released on bail, whereas, others including his sons and senior executives of his online magazine Next Digital will remain in jail. China Opens New Office For Security Agents to Operate in Hong Kong.

Visuals that emerged from Hong Kong showed a stream of supporters welcoming Lai outside the police station after he was granted bail. The demonstrators also waives copies of his newspaper Apple Daily to mark their angst against China.

The pro-democracy protesters also ensured a surge in the sale of Apple Daily, with 550,000 copies of the newspaper being sold today -- up from the regular readership of around 77,000 per day. Several restaurant owners in the city bought 50 copies each of the paper and distributed for free among the customers.

"Since the government doesn't allow Apple Daily to survive, then we as Hong Kongers have to save it ourselves," a person who bought the newspaper was reported as saying.

The frontpage of Apple Daily's edition of today showed Lai in handcuffs. The headline read: "Apple will fight on". Meanwhile, the Liaison Office of China's Communist Party (CPC) has warned of a crackdown against those violating the recently enacted national security law. The party has warned locals against falling prey to "external forces".

(The above story first appeared on LatestLY on Aug 12, 2020 12:07 AM IST. For more news and updates on politics, world, sports, entertainment and lifestyle, log on to our website latestly.com).