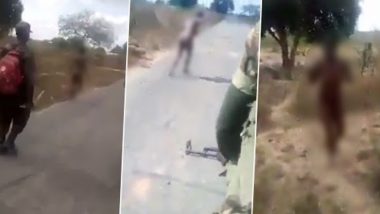 Maputo, September 17: Mozambique's Defence Minister Jaime Neto has called the video showing men dressed in army uniforms beating and killing a naked woman fake, BBC reported on Thursday. Speaking on a local television station on Wednesday, Jaime Neto said the video had been "doctored" by "malicious people" to damage the reputation of Mozambique's military. The minister added that the people responsible for creating the video would be paraded in front of the public and punished.

The video showed a group of men wearing army uniforms surrounding a naked woman. One of the men hits her on the head and body with a stick several times before others shoot. The video was reportedly recorded in Cabo Delgado province, where government troops are battling an insurgency by militant group al-Shabab. The men in the video were heard shouting "you're from al-Shabab", according to a global news agency report. Mozambique Extends Coronavirus Restrictions.

The video caused outrage after it went viral on social media. Rights groups also condemned the "killing". Mozambique has been battling an Islamist militant group in the north since 2017. The country's army has been accused of human rights abuses as it tries to put down the insurgency. The government denies the accusations.

(The above story first appeared on LatestLY on Sep 17, 2020 03:36 PM IST. For more news and updates on politics, world, sports, entertainment and lifestyle, log on to our website latestly.com).