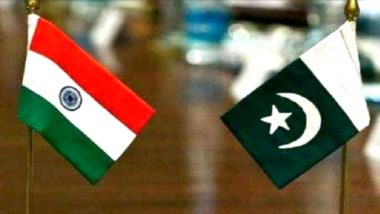 Islamabad, September 20: Pakistan on Sunday blocked the appointment of Indian diplomat Jayant Khobragade as India's chargé d'affaires in Islamabad by denying him a visa. The development will further downgrade diplomatic relations between the two countries. Khobragade's name was officially proposed in June this year. He is an Indian Foreign Service (IFS) officer of the 1995 batch.

Pakistan's move to oppose visa is reportedly due to Khobragade's seniority, reported The Times of India. Notably, in June this year, India asked Pakistan to reduce its staff strength in the country by half. New Delhi's decision came weeks after the police expelled two staffers at the Pakistan high commission in Delhi on charges of espionage. 'Unfortunate State' of India-Pakistan Ties Impacted Afghanistan Tremendously: Hamid Karzai.

According to reports, Pakistan Prime Minister Imran Khan will raise the matter of India reducing the staff strength at the Pakistan High Commission in New Delhi by 50 percent at the annual session of the UN General Assembly, which will begin from September 21. Indian PM Narendra Modi will also address a high-level meeting to mark 75th anniversary of the United Nations.

(The above story first appeared on LatestLY on Sep 20, 2020 11:53 AM IST. For more news and updates on politics, world, sports, entertainment and lifestyle, log on to our website latestly.com).