Rochester Police in Minnesota Detain Black Man Mistaking Him For Someone Else, Left Embarrassed After He Claims to Be An FBI Agent And Shows ID (Old Video Goes Viral) 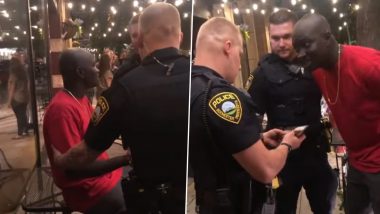 Rochester, June 1: Amid "racism" charges levelled against the police in United States following the murder of George Floyd, a video has come to the fore which has drawn further flak towards the country's law enforcement officials. In the footage being widely shared, the police is seen racially profiling and arresting a black man in Rochester, Minnesota. After he claimed to be an FBI agent and showed his ID card, the cops were left embarrassed. Upon further scrutinising the clip, it was found that video is a year-old and the man was not a personnel of the Federal Bureau of Investigation. Derek Chauvin, Minneapolis Cop Accused of Killing George Floyd, Taken Into Custody.

In the footage of five minutes and twenty seconds, the cops could be seen approaching the black man and asking him about his details. After the latter refused to accept that he was the person against whom they had issued a warrant, the police personnel pressed upon him to show his ID card.

The black man refused and told the police personnel to "stop harassing him". Unmoved, the cops forcibly handcuffed him and removed his wallet to ascertain his identity. On checking the ID card, they were left embarrassed as he was reportedly revealed as an "FBI agent". Netizens, however, later found that the suspect was not an FBI personnel.

‪Somethin’ been telling me to hold on to this video over a year now, ok. “Some days we make it home or some days we make it 6 feet deep.” Imagine getting killed at home, while jogging, playing, minding your own business or just damn breathing? #BeingBlackInWhiteAmerica!! This incident happened a year ago. The Minnesota police department been corrupt. Can’t even smoke a damn cigarette in peace. @theshaderoom @cnn @goodmorningamerica @worldstar Share and post!! Enough is enough!! #minneapolis #minneapolisriots #twincities #rochestermn #blacklivesmatter #policebrutality #policeofficer #racism #racialprofiling @shaunking @troubleman31 @realdlhughley @nickcannon @amandaseales @dailymail @theyoungturks ‬@Marclamont

The video of purported incident of racial profiling by Minnesota police comes amid growing outrage over the murder of Floyd in Minneapolis town. The deceased - a 46-year-old African American - was accused of using a counterfeit currency note on May 25. After receiving the complaint, a team of four police officers apprehended him.

After handcuffing him, the police officials pinned him on the ground and one among the cops - Derek Chauvin - kept his knee on Floyd's neck for over eight minutes. In the video which appeared online, the victim could be heard gasping and saying "I can't breathe".

Chauvin was arrested on Friday by the Minnesota police and charged with third-degree murder. The other three police officials have been sacked from duty. Protests have erupted across the nation demanding enhanced social and legal security to black Americans, apart from seeking expedited murder trial against all the four accused cops.

(The above story first appeared on LatestLY on Jun 01, 2020 07:10 PM IST. For more news and updates on politics, world, sports, entertainment and lifestyle, log on to our website latestly.com).