Sandra Parks, Who Wrote Award-Winning Essay on Gun Violence in US, Shot Dead at Her Residence in Milwaukee

On her demise, MIlwaukee Mayor Tom Barrett express remorse. Calling gun violence one of the most 'insane crimes' of this era, Barrett said it must come to an end. 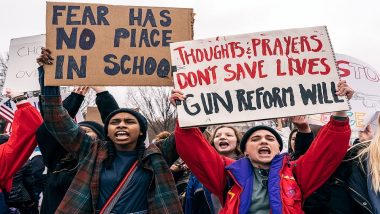 Milwaukee, November 23: 13-year-old Sandra Parks, who wrote an award-winning essay in 2016 against gun violence in the United States, was shot dead by inside her residence in Milwaukee. Her killing has re-invoked the debate on gun control laws in the US.

Parks was murdered on Monday night, when she was in her bedroom. Two men with guns fired random shots towards her house. One of the bullets sneaked through the window and struck her.

Parks' sister recalls she walked with her bullet-ridden to the next room and said, "Mama, I'm shot", before falling unconscious. She was rushed to the nearest medical facility, where they declared her dead on arrival.

On Wednesday, the Milwaukee police nabbed the accused and took them under judicial custody. The duo have been charged under various provisions including murder.

Here is the copy of essay which Park wrote on gun violence in 2016:

Sandra Parks, 13, wrote this essay about gun violence and its effects on children like her. This week, she was killed by a stray bullet while she was in her bedroom. https://t.co/ituJuEAWvz pic.twitter.com/nsU4KbX8t2

On her demise, MIlwaukee Mayor Tom Barrett express remorse. Calling gun violence one of the most "insane crimes" of this era, Barrett said it must come to an end.

The deceased child's mother recalled her as a valorous girl, who was not even cowed down by a bullet. "My daughter died like a soldier," she said, adding that she had protested against violence throughout her short life.

(The above story first appeared on LatestLY on Nov 23, 2018 01:44 PM IST. For more news and updates on politics, world, sports, entertainment and lifestyle, log on to our website latestly.com).