US Senate Passes Bill to Counter China’s Policy on Reincarnation

To counter the growing threat of China and to protect the religious freedom of Buddhists on Tibetan spiritual leader the Dalai Lama's reincarnation, the US Senate has overwhelmingly passed a bipartisan bill with a sweeping 68-32 verdict. 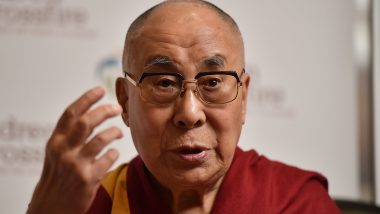 Dharamsala, June 9: To counter the growing threat of China and to protect the religious freedom of Buddhists on Tibetan spiritual leader the Dalai Lama's reincarnation, the US Senate has overwhelmingly passed a bipartisan bill with a sweeping 68-32 verdict.

The US Innovation and Competition Act (also known as the Endless Frontier Act), which allots $250 billion through investments in science in order to compete against China, also has several significant provisions on Tibet, the Office of Tibet in Washington said on Wednesday.  World News | China Failed to Destroy Institution of Dalai Lama, Say Think Tank Experts

Under 'Section 3306 policy with respect to Tibet', the bill, passed on Tuesday, says that the Special Coordinator for Tibetan Issues shall "either be appointed by the President, with the advice and consent of the Senate, or shall be an individual holding the rank of Under Secretary of State or higher".

The bill also calls for a Tibet unit within the political section of the US Embassy in Beijing until the US Chengdu Consulate is restored or when a US Lhasa Consulate is created.

The bill mandates, "The Secretary shall assign not fewer than two US direct-hire personnel to the Tibet unit and hire not fewer than one locally engaged member for such unit."

In addition, it calls for language training to be made available by the Secretary to the assigned personnel.

The bill goes on to affirm the sentiments of the Tibetan Policy and Support Act of 2020 by stating that the US should encourage the Secretary of State to engage with allies to support Tibetan Buddhist leaders' self-determination in His Holiness the Dalai Lama's reincarnation and to oppose Chinese interference.

The bill reaffirms the policies mentioned in the Consolidated Appropriations Act, 2021 that any "interference by the government of the People's Republic of China or any other government in the process of recognising a successor or reincarnation of the 14th Dalai Lama and any future Dalai Lamas would represent a clear abuse of the right to religious freedom of Tibetan Buddhists and the Tibetan people".

The bill further calls for international efforts to protect the religious freedom of Tibetan Buddhists.

The Dalai Lama has lived in India since fleeing his homeland in 1959. The Tibetan administration in exile is based in this hill town.

(The above story first appeared on LatestLY on Jun 09, 2021 05:37 PM IST. For more news and updates on politics, world, sports, entertainment and lifestyle, log on to our website latestly.com).