The International Organization for Migration (IOM) said that more than 164,000 people have been displaced since the beginning of this year in Yemen, which has been witnessing a bloody conflict for nearly six years. 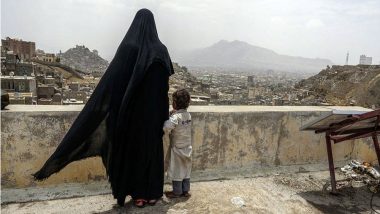 An internally displaced woman and her daughter look over the city of Sana’a, Yemen. (Photo: Giles Clarke/UN OCHA)

Sanaa, Nov 30: The International Organization for Migration (IOM) said that more than 164,000 people have been displaced since the beginning of this year in Yemen, which has been witnessing a bloody conflict for nearly six years.

"Since the start of this year, over 164,000 people have been newly displaced in Yemen, mostly by conflict," the IOM said in a statement posted on its official Twitter account on Sunday.

It said that the country's southeastern province of "Marib is the area where the highest displacement has taken place with over 12,500 families moving to crowded displacement sites in the city and surrounding areas", reports Xinhua news agency.

Meanwhile, Yemen's official unit for the Internally Displaced People (IDPs) in Marib said that it recorded 54,400 displaced people during the period from August 20 to mid-November.

The report confirmed that the IDPs are from various districts and villages located in Marib's southern part.

The government report indicated that the Houthis' recent military escalation against Marib is the main reason for the new displacement wave, noting that a number of IDPs camps have been affected or damaged.

The oil-rich province of Marib is witnessing a major military escalation, as the Houthis have penetrated over the past weeks and months into large areas of the government-controlled province that houses more than 2 million displaced people.

The government forces backed by the Saudi-led coalition are based in Marib to lead their military operations against the Houthis in the country's northern regions.

Yemen has been mired in civil war since late 2014, when the Iran-backed Houthi militia seized control of several northern provinces and forced the internationally-recognized government of President Abd-Rabbu Mansour Hadi out of Sanaa.

The Saudi-led Arab coalition intervened in the Yemeni conflict in 2015 to support Hadi's government.

(The above story first appeared on LatestLY on Nov 30, 2020 12:52 PM IST. For more news and updates on politics, world, sports, entertainment and lifestyle, log on to our website latestly.com).