The Saaransh actor took to his Instagram handle and shared a monochrome throwback picture featuring himself posing with Leonardo. 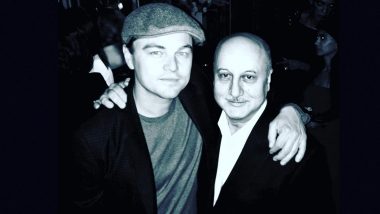 Seems like it is a major throwback Tuesday for veteran actor Anupam Kher, who recalled meeting Hollywood star Leonardo DiCaprio in a recent social media post. The Saaransh actor took to his Instagram handle and shared a monochrome throwback picture featuring himself posing with Leonardo. As per Anupam, the picture was captured when the two actors met at an event in Los Angeles. The veteran actor is seen wearing a black suit, while Leonardo looks dashing as always in his semi-formal blazer, T-shirt and an English golf flat cap. Anupam Kher Remembers Late Yash Chopra, Actor Pens Loving Note in the Memory of Bollywood’s Iconic Filmmaker.

In the caption, Anupam wrote, "I met @leonardodicaprio at an event in Los Angeles a few years back. I introduced myself. I said, "I am an Indian actor." He said, "I know!" I asked, "How?" And then he just gave me a warm hug. He was kind and affectionate. The best thing about being an actor is that you meet wonderful people from all over the world and bond with them easily. Actors are a tribe in themselves." The 66-year-old actor is one of the most active Bollywood celebrities on social media. He keeps on sharing such throwback posts and updates about his day-to-day activities. Anupam Kher Off to His Shimla Home With Mother, Shares Video from the Flight.

Meanwhile, on the work front, in May, Anupam had won the Best Actor award at the New York City International Film Festival for his short film titled 'Happy Birthday', adding a feather to his cap. The film also bagged the Best Short Film award at the prestigious film festival. 'Happy Birthday' marked Anupam and Aahana Kumra's second collaboration after featuring in the 2019 critically acclaimed movie 'The Accidental Prime Minister'. Apart from 'Happy Birthday', the veteran star has several other projects in the pipeline including 'The Last Show', 'Mungilal Rocks', and 'The Kashmir Files'.