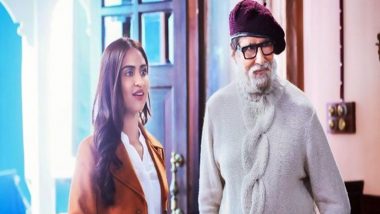 Indian television star Krystle D'souza, who has debuted on the silver screen with Anand Pandit's mystery thriller Chehre, has recalled the memories of meeting megastar Amitabh Bachchan on the sets of the film. The Amitabh Bachchan and Emraan Hashmi starrer mystery thriller Chehre has been in the news since its inception. The movie has managed to grab the attention of the audience with an intriguing trailer which was launched recently by the filmmakers. Chehre: Amitabh Bachchan, Krystle D’souza, Emraan Hashmi’s Mystery-Thriller To Release In Theatres On April 30.

Helmed by Rumy Jafry the movie leads the audience through a puzzling path stacked with mystery, anticipation, truth, allegations, defence, and struggle. Recalling the moment she met Bachchan for the first time on the set, Krystle said, "I can never forget that day, it feels like just yesterday. I went up to him and introduced myself and he introduced himself back and I said of course I know!!!" Chehre Director Rumy Jafry Talks about the Best Part of Working with Amitabh Bachchan.

"He was so warm and welcoming and so jovial at the same time. We did a few line rehearsals and went straight into the take while my mom stood in a corner teary-eyed!" she added. The film is all set to hit the screens on April 9.