Coldplay, BTS Collaboration 'My Universe' to Release on September 24

After months of speculation, British band Coldplay and South Korean music sensation BTS on Monday confirmed they are joining hands for a single titled My Universe. 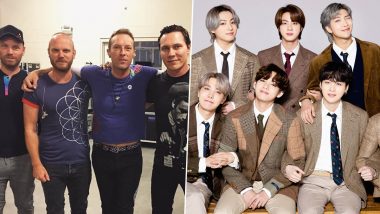 After months of speculation, British band Coldplay and South Korean music sensation BTS on Monday confirmed they are joining hands for a single titled My Universe. The track is slated to be released on September 24. Jubin Nautiyal to Perform Live in Dubai on Octobber 29, Says 'I Am Delighted to Bring Some Joy to My Audience'.

Both the groups made the announcement on social media. "#MyUniverse // Coldplay X BTS // September 24th //" wrote Coldplay on Instagram alongside the cover art of the song. Actor Manuj Tilakraj Gulati Is All Set To Ace The Sikh Look In His Upcoming Film 'Assi Nabbe Poorey Sau'.

In February, the Korean group covered Coldplay's 2005 hit number "Fix You" on MTV Unplugged. The British group later shared a link of BTS' special performance on Twitter, writing "beautiful" in Korean and signed "Love" in English, along with the individual initials of the members of the band, also including Guy Berryman, Will Champion, and Jonny Buckland. Back in July, there were rumours that BTS would be featuring on Coldplay's new song. On Sunday night, BTS won the best group and best K-pop act trophies at the MTV Video Music Awards.