Apurva: Tara Sutaria Begins the Shooting of Her Next Action Thriller in Jaisalmer (View Pics)

Tara Sutaria, on Wednesday, began the shooting of her next action thriller film Apurva in Jaisalmer. Apurva marks the 26-year-old actor's first female-oriented film of her career. 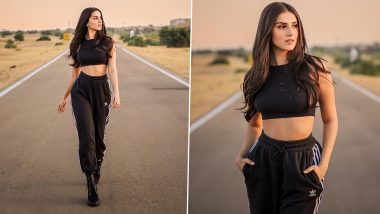 Bollywood actor Tara Sutaria, on Wednesday, began the shooting of her next action thriller film Apurva in Jaisalmer. Taking to Instagram, Tara shared a couple of pictures which she captioned, "And so it begins.. This wild ride to play #Apurva." Tara Sutaria in an Embroidered Bralette Paired With Denim Shorts and Cape Is All Things Sexy (View Pics).

In the pictures, the Heropanti 2 actor could be seen donning a black crop top paired up with black track pants and matching boots. Apurva is an edge-of-the-seat thriller and will see Tara Sutaria in a never seen avatar, based on a story that will keep audiences hooked right to the very end.

Earlier in July, Tara announced the film on her Instagram with a special post that she captioned, "Fearless has a new face, and her name is #APURVA! I am so honoured and thrilled to play such a strong, powerful young woman. Apurva is a game of survival with impossible odds. A nerve-wracking tale that keeps you hooked till the end." Nature 4 Nature Teaser: Ishaan Khatter and Tara Sutaria Collaborate For Upcoming Project (Watch Video).

About Apurva, the Student of the year 2 actor earlier stated, "I couldn't have asked for a better script and as a young woman it makes me proud to be able to play Apurva. This is a story of a girl whose grit and inner strength is remarkable, and I'm thrilled to begin my journey in portraying a young woman whose intelligence, wit and courage are the reasons she survives against all odds." Apurva marks the 26-year-old actor's first female-oriented film of her career. Produced by Murad Khetani and directed by Nikhil Nagesh Bhat, the official release date of the film is still awaited.

Meanwhile, Tara was recently seen in an action thriller film Ek Villain Returns which gathered decent responses from the audience.