While a number of international celebrities, including pop star Rihanna, had also tweeted in support of the farmers' protests, which entered its 100th day on Friday, the 'toolkit' matter became a major issue with the Delhi Police later registering FIRs against several people for allegedly trying to tarnish India's image. 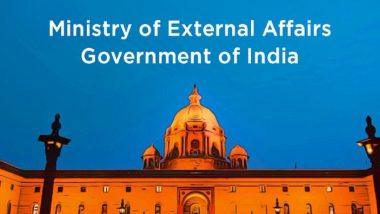 New Delhi, March 5: Young Swedish climate activist Greta Thunberg's recent comments on the farmers' protests in India do not form a bilateral issue between India and Sweden, and the matter did not come up during an online summit between the prime ministers of the two countries on Friday, the Ministry of External Affairs said.

At a special briefing after the summit, Vikas Swarup, Secretary (West) in the ministry, was asked whether the issue of Thunberg's comments on the farmers' protest was taken up by India with Sweden during the meeting. "The answer is no. This is not a bilateral issue between India and Sweden," Swarup said.

Last month, Thunberg had taken to Twitter to say, "We stand in solidarity with the #FarmersProtest in India." This was followed by another tweet a day later, in which she shared "a toolkit for those who want to help". Greta Thunberg Toolkit Case: Swedish Climate Activist Backs Disha Ravi, Tweets on 'Human Rights'.

While a number of international celebrities, including pop star Rihanna, had also tweeted in support of the farmers' protests, which entered its 100th day on Friday, the 'toolkit' matter became a major issue with the Delhi Police later registering FIRs against several people for allegedly trying to tarnish India's image.

The 'toolkit' document, listed various actions, including creating a "Twitter storm" and protesting outside Indian embassies, to support the farmers' protest. In a statement, the MEA had said last month that some "vested interest groups" were trying to enforce their agenda on the protests and that a very small section of farmers in parts of the country has some reservations about the farm reforms which were passed by Parliament after a full debate and discussion.

However, the Samyukta Kisan Morcha (SKM), an umbrella body of 41 farm unions spearheading the agitation, had welcomed the support extended by international personalities, saying it was a matter of pride that they are showing sensitivity towards the cause of farmers, but it was unfortunate that the government of India is not understanding their pain.

Emphasising that the protests must be seen in the context of India's democratic ethos and polity, the MEA in its statement had said some vested interest groups have tried to mobilise international support against the country. Greta Thunberg Toolkit Case: Climate Activist Disha Ravi Sent to 3-Day Judicial Custody by Delhi High Court.

Farmers, mostly from Punjab, Haryana and western Uttar Pradesh, have been camping at several Delhi border points, including Tikri, Singhu and Ghazipur, since November 28, demanding a complete repeal of three farm laws and a legal guarantee on minimum support price (MSP) for their crops.

The government has denied allegations that it was trying to put an end to the MSP and the mandi system. Prime Minister Narendra Modi has also assured farmers that the MSP would continue.