After Maharashtra Chief Minister Uddhav Thackrey and state Home Minister Dilip Walse on Wednesday launched 91 'Nirbhaya Squads' in Mumbai, State Cabinet Minister Aditya Thackrey said that women should be allowed to roam freely, adding that it is an important step in making Maharashtra a fear-free state. 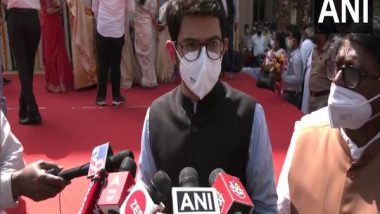 "When an incident happens, we question the woman: why was she roaming outside, what was she wearing? Women should be allowed to move freely. This is an important step towards making a fear-free state. Women safety is a social issue, a civic issue and a law enforcement issue. Children in schools must be taught on concepts of 'good touch' and 'bad touch'. We are also working on providing proper CCTV cameras, streetlights," said Thackrey while talking to the media. Also Read | Madhya Pradesh: Bomb Scare With Note Naming UP CM Yogi Adityanath on Flyover in Rewa District.

Addressing the launch ceremony today, CM Uddhav Thackeray said, "We will work to ensure that Maharashtra will be known as the saviour of women not only in India but in the entire world. Maharashtra is a 'Shakti Pujak' (worshiper of women power) state," He said that Maharashtra always worshipped and respected women."The squads consist of specially trained female and male officers stationed across Mumbai, 24/7. One can dial 103 for immediate assistance," said Maharashtra Cabinet Minister Aditya Thackeray during the event today.

Meanwhile, the State Home Minister stated that a society where women are not safe can never prosper. "The safety of women is not only limited to herself and her family, but to the whole society. Women who visit police stations with a complaint should be listened to and action should be taken immediately," Patil said.