No Coronavirus Patient Under Home Isolation in Delhi Has Died in July: Study 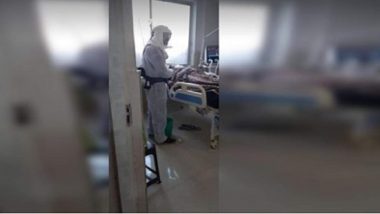 New Delhi, July 11: Not a single coronavirus patient under home isolation in the city has died in July and there has been a "sharp decline" in daily fatality figures in the past two weeks, a Delhi government study on COVID-19 deaths has said.

The city's Health department presented these findings to Chief Minister Arvind Kejriwal on Friday, days after he directed them to study all COVID-19 deaths in the last fortnight to understand what steps could be taken to further reduce the number of fatalities. Anti-Coagulants, Corticosteroids Now Mainstay of COVID-19 Therapy for Moderate and Severe Cases, Says Health Ministry As Total Recovery Crosses 5 Lakh.

"During the June 24 to July 8 fortnight, a total of 691 deaths took place in Delhi, which is an average of 46 deaths per day during this period," the government said in a statement.

According to the study, the number of daily deaths in past few days has come down. From a high of 101 daily deaths in mid-June, daily deaths have come down to around 46 deaths during the last fortnight, registering a significant improvement, it said.

"Out of the total 691 deaths that took place in the last fortnight, only seven deaths happened in home isolation (between 24 June to 30 June). Not a single coronavirus patient has died under home isolation in July," the statement said.

This can be attributed to the chief minister's decision to distribute oximeters to all patients under home isolation, it said, adding that the use of these oximeters alerts the patients of any dropping oxygen levels which is an early sign of deteriorating health.

The chief minister held a review meeting on Friday to discuss measures which needs to be taken to further reduce mortality.  In view of the deaths at the hospitals (and not in home isolation), it was felt that systems in each hospital needs to be examined in detail, the statement said.

The chief minister has asked for the ratio of deaths to total number of patients discharged from each hospital. Hospitals with low ratio would mean better management, it said.

Good practices in the hospitals would be studied and implemented at those facilities where more deaths are taking place. The chief minister will continue to monitor all serious cases on a daily basis, it added.

Of the 691 deaths in the last fortnight, 505 patients were in serious condition when admitted to the hospitals and 291 were already in hospital when they tested positive for COVID-19.

The study also found delay in hospital admission in case of 28 patients.

According to a central government's committee, 45 per cent of COVID-19  deaths in India occur during the first 48 hours. In Delhi, this has come down to only 15 per cent, the statement said. India Reports Highest Single-Day Spike of 27,114 New COVID-19 Cases in Past 24 Hours, Tally Crosses 8 Lakh-Mark, Death Toll Rises to 22,123.

A number of steps have been taken by the Delhi government to lower COVID-19 deaths which have contributed to the reduction in number of fatalities, it said. The interventions at six crucial points - enhanced testing, home isolation of asymptomatic and mild symptom patients, faster ambulance service, quick hospital admission, easy hospital bed availability and enhanced ICU capacity - have started showing results, it added.